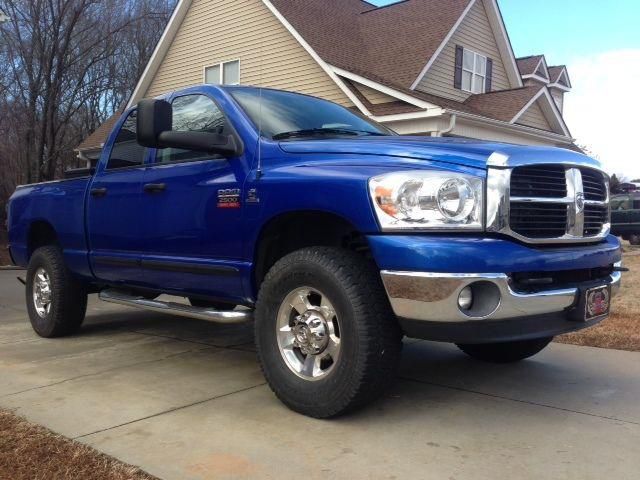 2007 Dodge 5.9 Cummuns Diesel 4 Door Crew Cab 4x4 Last Year Of The Highley Sought After Legindary 5.9 Cummins This Is A One Owner Truck That Has Never Been Involved In An Accident And Has Been Lightly Used. Sc Truck So There Is No Rust Or Corrosion Damage Of Any Kind. This Is Equipped With A Turn Ball Fifth Wheel. It Was Used To Pull A Small Horse Trailer Every Now And Then. It Has Highway Miles Due To A Long Commute As A High School Teacher To Another County. (always Adult Driven) This Great Looking Truck Has Never Had A Programer Installed Or Any Other Type Of Modifications Done To The Motor. This Truck Has The Thunder Road Package Which Has The Ecm Turned Up From The Factory Giving It Some Extra Horse Power And Torque So It Is Considered An (ho) High Output Moter. Another Great Feature That Comes With The Thunder Road Package Is The Transmission Is Heavier Built And Has Different Shift Points Than The Regular Models. Always Well Maintained With Brand New Brake Pads As Well As Two Matching Caterpillar Batteries. Sits Nice On Bf Goodrich Lt315/70r/17 Tires Interior Is In Great Shape No Stains No Rips And Has Never Been Smoked In. All Around Truck Is In Above Average Shape And Is Ready To Go Anywhere And Do Anything. Please Txt Or Call Me With Any Questions Thanks Mark (864) 934-3494 Nada Clean Trade In Is 21,000