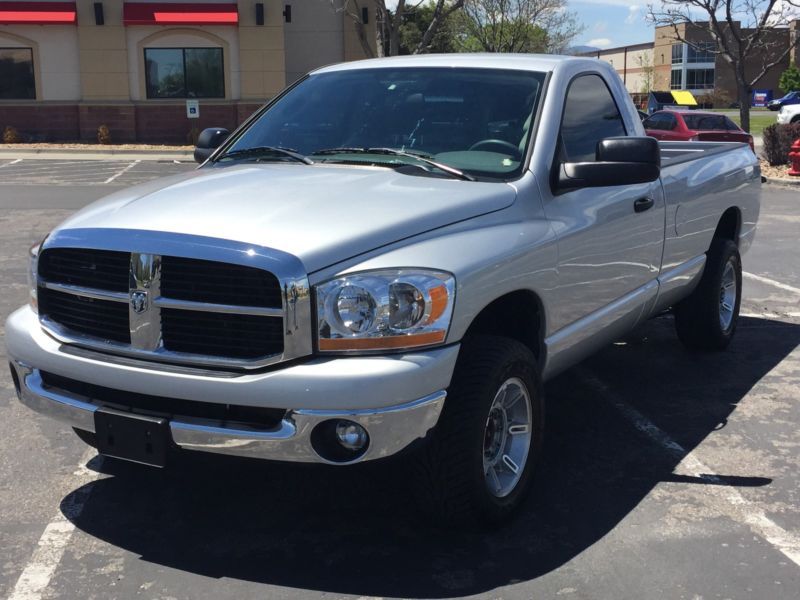 2006 Dodge Ram 2500 4x4 SLT.
Engine:
Number 4 cylinder burned a piston so the motor was taken to Mountain High
Performance in Arvada Colorado. Mountain high is a respected shop and Bill, the
owner, has built Cummins motors that have powered trucks to 9 second quarter
mile passes. The cylinder head was gone through, and all cracked were repaired.
The head was given a big  valve conversion to increase flow. New seats were
also installed, with 1.340 oversized valves. All guides were repaired as needed,
and the head was decked to .008”. Some light porting/polishing was also
done.
The block was boiled, and cleaned, and the burned cylinder was sleeved, and
everything was bored to .040 over. Each cylinder was honed to fit each piston,
and they were numbered in order so they were all fitted to their respective
cylinders. All bearings were also replaced.
The engine was balanced, and the crank, cam, drive gears, push rods, connecting
rods, pistons, rings, main bearings, oil pump, and sleeve were all cryogenically
treated to increase the harness of the material. Freeze plugs were also threaded
to prevent them from popping. ARP 425 head studs and main studs were used. Cam
shaft is a Hamilton 188 cam, with their valve springs, and HD push rods. The
connecting rods used were new 12 valve rods that were shot peened and cryo
treated.
The machine work alone ran a discounted cost of 8,608, which would have easily
been over 10,000 had I not worked in the same industry and dealt with the shop
on a day to day basis.
Aftermarket parts:
ATS Stage VI transmisison. Billet shafts, flywheel, co-pilot, five star
converter, and deep pan. Trans was gone through less then 100 miles ago at
ATS.  $8,580
ATS Aurora 5000 Turbo Kit $2,087.27
ATS Twin CP3 kit $2,350
ATS Exhaust Manifold $495
Hamilton 188 cam $699
Hamilton Push Rods $275
Hamilton Valve Springs $399
ARP 425 Head Studs $430
FASS 220GPH Titanium fuel system $860
Dynomite 220HP Injectors $4,000
Beans Diesel Fuel Sump $149.95
Starlite Diesel Autocal with Custom Tuning $795.00
Fuel Rail Cap $50
Autometer C2 gauges
-Boost
-Pyro
-Drive Pressure
-Trans Temp
-Drive Pressure
-Fuel Pressure
—— All in a overhead pod and a pillar pod
— — Total: $842
Nitrous kit with custom painted bottle and billet bracket (never used on this
motor)
$600
Cal Trac Traction Bars $419.00
H2 Wheels $400
Custom stack with FTE resonator $560
Total parts: 23,941.54
Machine Work: 8,608 (heavily discounted)
Labor was all done myself, but would cost someone somewhere around 4000 for all
of this.
What it would cost you to build this truck, not including the truck,
approximately, $36,549.54, and that is with heavily discounted machine work.
This truck, by itself, with only 34K miles, would fetch somewhere around $30,000
is my guess. That is $66,549 if you had to go out and do all this yourself!!!
This is a heck of a deal.
Truck has not been dynoed, on it’s old setup with stock head and cam it made
730 rear wheel horsepower on fuel and 918HP on nitrous on bulldog tuning. The
best previous time, it has not been ran since, was a 11.2@124mph. This is a easy
10 second truck now.
As I said I am  the original owner of this truck. It was purchased while I was
a senior in high school, and I love it. Sadly I am relocating to California and
need to afford some expensive real estate. Truck really needs nothing but a new
owner.
Truck does not have a bumper in the pictures, it will have a painted to match
roll pan on by the time the auction ends, done by a reputable shop. Really the
only issue with the truck is a few small rock chips along the very lower rockers
from a dirt road, and a very slight scratch on the front right fender. Interior
isn’t perfect, but it looks pretty darn good for 10 years old. For the past
three years I have worked at one of the largest diesel performance shops in the
area, this truck is done right