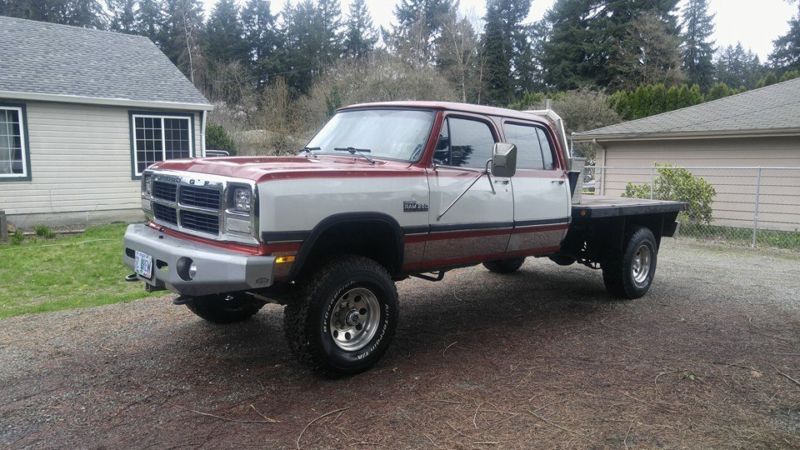 If you have any questions please email at: jasonjddobkin@1mum.com .

Up for sale is my custom built 1992 Dodge Cummins Crew cab. It started out as an extended cab long bed truck. In
2001 it was stripped down to the bare frame to begin the build to make it into a crew cab. The chassis was
stretched and reinforced. The cab came from a 1980 forest service truck from California. It was sand blasted down
to bare metal to make sure there was no rust anywhere. The cab and rear doors are from the 1980 truck. Everything
else is 1992. It is titled and vin'd as a 1992. All the 92 interior was installed, along with power seats from a
Ford super duty. The center console is a locking unit from Tuffy. Everything is power, including the rear doors.
During the build a power sunroof from a Mercedes was installed. It does not leak at all. Never has. The truck is
100% rust free. Not a spot anywhere. It has Buckstop bumpers front and rear. I have the brush guard, but it is not
currently installed. Right after the truck was built it was photographed for Buckstops website. I have included
some of those photos. The photos of the truck with the original bed are old photos. I no longer have the bed for
the truck.
The engine is a 12 valve Cummins turbo diesel and the transmission is a 5 speed manual Getrag. It has a Dana 60
front with Chevy crossover steering, and the rear is a disc brake Dana 80 from a 2001 Ram. It has 3.55 gears. Last
fall all the u-joints and brakes were replaced. Clutch is in good shape and everything works flawlessly. It has a
4" lift with near new 35" BFG all terrains on 16.5" aluminum wheels.
Last fall the original engine was replaced with one that had fewer miles. The new engine has 120k, and before it
was installed it got a bunch of new gaskets replaced, the killer dowel pin fixed and new main seals. I also had new
75 hp injectors, and a new Holset HX35 turbo installed at that time. Other than those two items, the engine is
stock. The truck has driven about 2500 miles since all this work was done.
As far as extras, the truck has a straight pipe exhaust, a Pacbrake exhaust brake, onboard air compressor and rear
airbags with controls and gauge inside the cab. The bed has a hidden gooseneck hitch. The bed surface is Trex deck
and it's seen some use. The truck was built for work. The bed was originally built to dump, and still could if a
hydraulic cylinder were to be installed. All the original bed mounts are still there, so putting a factory bed back
on it would be an easy thing to do.
On to the bad. The clearcoat is starting to peel in a few places, mainly on the hood. I did my best to show it in
the pictures. There is one spot of minor damage in the front passenger corner by the bumper where the truck hooked
a fence post. It has minor scratches here and there, but no major damage. Its never been wrecked or in any kind of
accident. Mechanically there are only 2 things wrong with this truck. The cruise control does not work, and the
speedometer bounces around. I'm pretty sure it needs a new cable. It just turned 200k, but with the speedo acting
up, the actual mileage is around 210k.