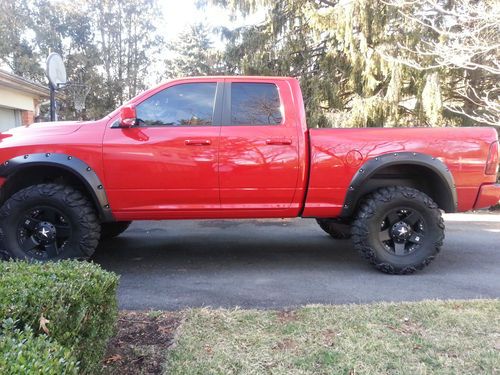 I am selling my 2011 dodge ram 1500 because i am looking to upgrade to a diesel. This truck is in immaculate condition and has low miles. I can not say enough good things about this truck. It has a new 6 inch suspension lift kit installed, 18 inch rockstar XD rims wrapped in 37 inch Nitto mud grapplers. The tires still have 95% tread on them. The headlights are smoked recon headlights with halo projectors and HIDs and LEDs. Also the truck has bushwhacker fender flares. THe interior is full leather with headed seat and steeering wheel. touchscreen radio. This is a really clean and monster looking truck. I can not tell you how many looks and comments I get on it just driving down the road. Over 10k invested!!  You can call or text me about this vehicle and I can send you more info or pictures. 443-326-3302