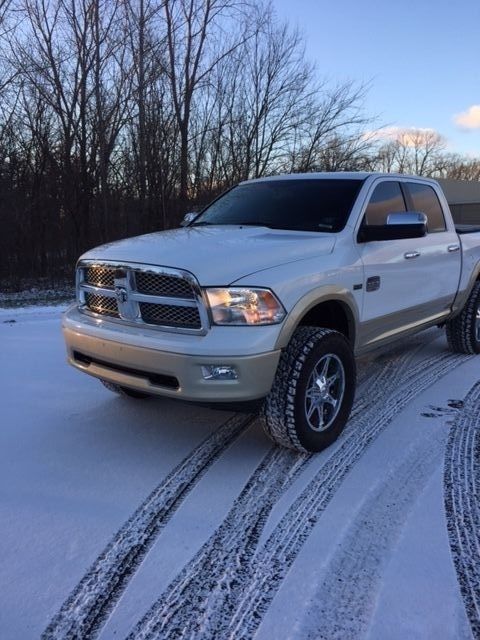 This is a 2011 RAM 1500 Laramie Longhorn. The fact that it is the Longhorn edition tells you that it has absolutely
every feature imaginable. To list the basics: it is a
-4X4
-5.7 Liter Hemi
-Bullydog tuner
-Lifted on 20 inch wheels with 35 inch Nitto Terragrappler All Terains(less than 5k miles on tires)
-Navigation, Satellite Radio, Blue Tooth, Hard Drive, In-Dash Entertainment System, Back Up Cam
-Sunroof
-Heated and Cooled Seats(Front and Back)
-Heated Steering Wheel
-Regular Outlet plus
-Tinted Windows
-Side Steps that automatically fold down when you open the door and fold up when you close the door
-Factory Alpine Sound System and SubWoofer
-Storage compartments in the floors, under the seats, and everywhere
-Bed Liner
-Tonneau Cover
-Towing Package with trailer brakes
-integrated garage door openers
-automatic rear sliding window in the back
-Child seat hooks
-Seats fold up and out of the way if you don't want them
*The only flaw that I can find with the vehicle is that there is a small piece of black plastic that is cracked on
the tailgate.
**Buyer is responsible to pick up or have the vehicle shipped but I will be very accommodative and can make special
arrangements within the Midwest.