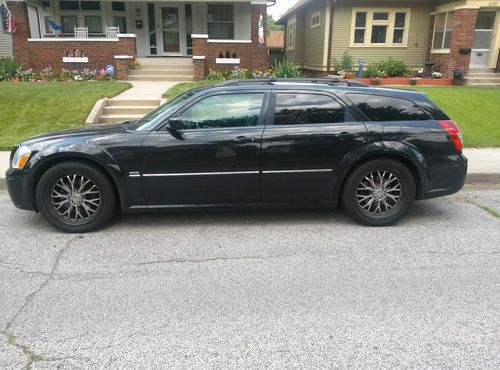 Up for sale is a 2005 Dodge Magnum.  Vehicle is black and has 55,000 miles on it.  We purchased this car 2 years ago from Hubler Chevrolet in Greenwood, IN.  It had 36,000 miles on it at the time.  It has every imaginable option including heated seats and a factory cover to hide your valuables stored in the back.  The after market wheels are 20 inch (We purchased the car with them on it and do not have any other rims for it.).They have some scratches and scuffs from rubbing against curbs when parking, but still look good.  New tires were put on approximately a year and a half ago.  Car has some minor scratches, but nothing major.  Most are on the back bumper from loading items into the back.  The leather interior is in fantastic shape with NO flaws to speak of.  Car comes from a non-smoking family.
The car drives great and has plenty of get up and go.  However, it does have a front end rattle that has been that way for as long as I can remember.  Not sure what it is and it is only noticeable when driving on rough roads.  Other than that, the car performs great.
SHIPPING:
Buyer is responsible for pick-up of vehicle.  Any costs or damages associated with vehicle's shipment is solely the buyer's responsibility.
PAYMENT:
A non-refundable deposit of $1,000.00 is due within 2 days of the auction's end.  The remaining balance is due within 5 days.  We will accept cash (in person), cashier's check, or PayPal for payment.  IF either of these deadlines is missed, we reserve the right to sell the vehicle to the next highest bidder or another qualified buyer.
WARRANTY:
This vehicle has NO warranty and is sold as-is.  If you are local and would like to inspect the vehicle, please do so before the auction ends.  Seller is not responsible for any inspection costs.
**Please be advised that the seller reserves the right to end the auction early if the vehicle is no longer available for sale.