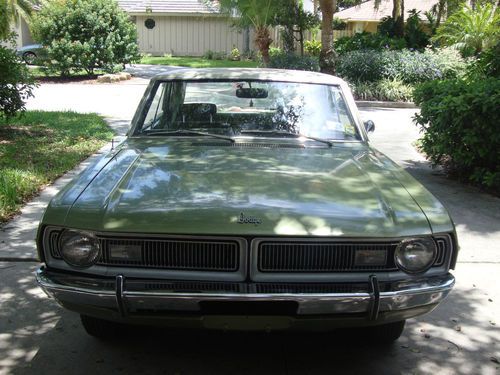 Condition: UsedA vehicle is considered used if it has been registered and issued a title. Used vehicles have had at least one previous owner. The condition of the exterior, interior and engine can vary depending on the vehicle's history. See the seller's listing for full details and description of any imperfections.Seller Notes:"All original. Paint ,interior. Minor rust spots. No rust through. Car is in beautiful condition. 51,402 original total miles"

This Dodge Dart Swinger is in Original Condition with 51,402 total original miles.  The interior is in near "like new" condition. Seats were always covered. Exterior is in great shape, has a few imperfections ( spot rust , a couple dings , a light scratch ) .

Vehicle runs  and drives. This car had one owner, my aunt who drove it until she was 94 years old. ( For real) . So it had very light use. The car was and is  always kept in a garage. Never been smoked in.
The white vinyl roof is original and has no knicks or tears and is solidly attached to the steel roof still. The am radio , headlights, tail lights, windshield wipers all work. The interior carpet ( original ) is covered with vinyl floor mat  and does not need replacement.
A perfect car to put back in original condition or convert to something with a little more muscle.
Shipping : Buyer Responsible for Vehicle pick-up and Shipping
Payment : $500.00 Deposit within 24hrs of winning bid.
Full payment by certified bank check within 7 days.
( Prior to Buyer pick-up)