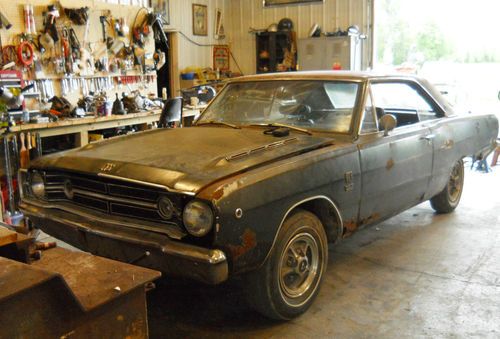 This is a true barn find.  This is a complete 1968 Dodge Dart GTS (Rare).  I have not run the numbers but I am pretty sure that it is matching.  I know relatives of the owner who purchased it new.  I have original documentation that shows it was purchased from Eastside Dodge in Indianapolis Indiana.  The car has not been plated since 1974.  The motor is stuck, transmission is unknown but they are all there and all complete.  Have the original hubcaps.  Frame rails, floor pans and trunk pan are all in excellent shape with only slight surface rust, but not rusted out.  Interior is complete (rough condition) with all badging.  There is a gyromatic traction system installed in the trunk and I have heard they were used for drag racing in the 1970's.

I have many pictures.  If you would like more please ask.  If you have any questions please let me know.

Car is for sale locally and I reserve the right to end the auction at any time.  Buyer is responsible for pick-up.  Shipping is not available.  Buyer needs to give a $500.00 deposit through Paypal within 24 hours and a phone call to make arrangements for pick-up.