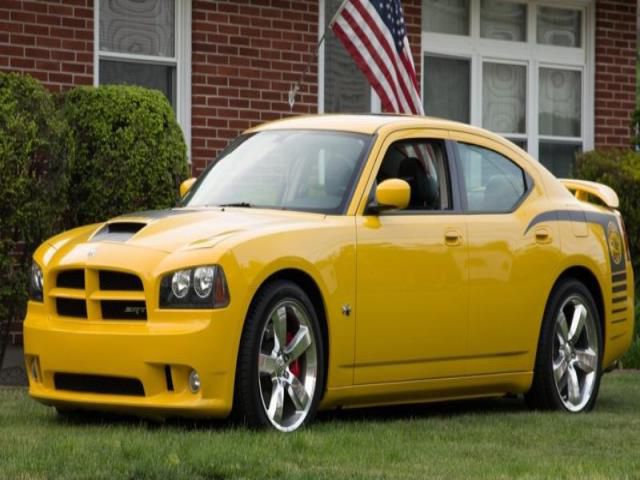 2007 DODGE CHARGER SRT-8 SUPER BEE LOADED WITH OPTIONS AND EXTRAS. Low Mileage – Only 18,805 Pampered Miles LOOKS AND SMELLS FACTORY NEW! This Car Comes with all the standard SRT-8 equipment PLUS the following: * Customer Preferred Package 21X * Super Bee Special Edition SRT-8 (#606 of 1000) * SRT Option Group I * Power Sunroof * 245/45ZR20 Goodyear F1 tires with less the 2,500 miles on them. * In Dash Factory Unit ALONG WITH an additional Satellite in-dash factory unit with matching dash bezel * Dealer Installed Mopar Remote Start Package * Dealer Installed Mopar Performance CAT-BACK Exhaust System (Manufactured by CORSA) * 85 MM Mopar Throttle Body * AIRAID C.A.I. which interfaces with Factory Functional Hood Scoop PLUS Factory OEM Air Intake Assembly * DiabloSport PREDATOR Hand Held Engine Programmer Model U7135 with optional PC Cable * “Hurst Pistol Grip” Shifter PLUS Factory Shifter * Factory Issued 1:43 Scale Model of Car with 606 of 1000 Nameplate direct from Chrysler in original box I purchased it from the original owner six years ago with 2,600 miles on the odometer. The only things I have done were replace the original 4-season tires with a 3-season Goodyear F1 Supercar tires and replace the original brake pads. Oil is changed every 2K. I have all the stock parts including the original exhaust system,air box assemble, throttle body,brake pads, etc. I have the Title in hand. You would be hard pressed to find a nicer Bee.