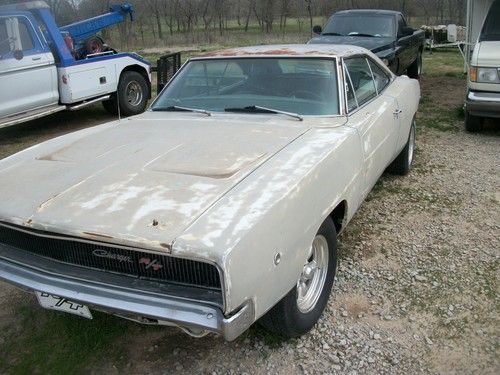 1968 DODGE CHARGER R/T. YES WE KNOW SHE'S A LITTLE OLD BUT THAT DON'T MEAN SHE'S SLOW. SHES SET UP WITH 440 BORD 40 OVER AIUMINUM HEADS THAT HAVE BEEN ON A FLOW BENCH, ITS GOT A BRAND NEW DEMON CARBORATOR. THIS CAR HAS ONLY BEEN FIRED 3 OR 4 TIMES WITH THE NEW MOTOR. SO THIS AUCTION IS WITH OR WITHOUT MOTOR AND RADIATOR. THE OLD CAR HAD FLOOR PANS REPLACED, AND THATS ALL THATS BEEN DONE TO THE BODY. AS YOU CAN SEE IN THE PICTURES IT HAS ON THE RIGHT REAR BY THE DECK LID THERES SOME RUST, THE CAR HAS SURFICE RUST AND A FEW PIN HOLES UP AT THE VERY RIGHT HAND FRONT.  VERY REPAIRABLE, FRAME RAILS ARE SOLIDE, CAR HAS NEW FULE TANK, AND LINES CLEAR TO THE FRONT, I HAVE ANOTHER INSTUMENT CLUSTER THAT GOES WITH THE CAR. IF YOU HAVE ANY QUESTIONS ABOUT THE CAR CALL ME AT 417-847-7254 ASK FOR DEAN. THANK YOU FOR LOOKING AT THE OLD CAR.