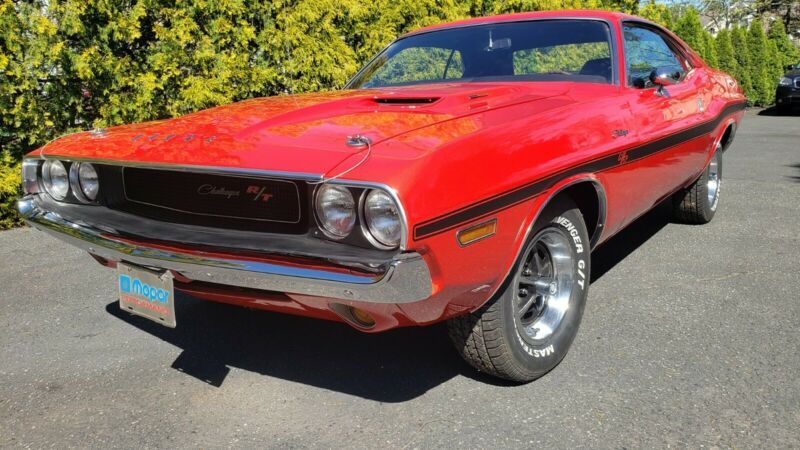 THE BODY WAS SANDED TO BARE METAL. THERE WAS NEVER A VINYL ROOF SO SHE WAS
SPARED THOSE TYPICAL RUST ISSUES. ALL RUST(MOSTLY SURFACE) WAS REMOVED SHE STILL RETAINS 80% OF HER ORIGINAL SHEET
METAL. BODY WAS GIVEN MANY COATS OF EPOXY PRIMER,BLOCKED THREE TIMES AND WAS REPAINTED THE FIRST TIME USING ALL PPG
MATERIALS. FE5 RALLYE RED ACRYLIC URETHANE BASE COAT CLEAR COAT. . THE CAR WAS NEVER WRECKED OR ABUSED.BODY PANELS
LINE UP ABOVE AVERAGE-THE DOORS AND WINDOWS ALL OPEN EASY AND CLOSE TIGHT. WINDSHIELD IS NEW ALL OTHER GLASS IS OEM
AND NICE.WITH ONLY A FEW UPGRADES, SHE IS AS CLOSE TO WHAT YOU WOULD HAVE BOUGHT IN 1969 ON A NEW CAR LOT AS I HAVE
SEEN!
THE FRAME IS SOLID FRONT TO BACK AND UNDERCARRIAGE IS SEALED AND UNDERCOATED THERE IS NO VISABLE OR HIDDEN RUST
THAT I CAN SEE ANYWHERE.THE FLOORS ARE ALL ORIGINAL WITH COUPLE OF PATCHES WELDED ONLY IN THE DRIVERS FOOTWELL
THE TRUNK FLOOR AND GAS TANK/SENDER IS NEW BUT DROP OFFS ARE ORIGINAL
COMPLETELY #S MATCHING DRIVETRAIN WAS REMOVED AND THE ORIGINAL 383 MAGNUM ENGINE WAS TAKEN APART FOR THE FIRST
TIME AND REBUILT I WAS TOLD THERE WAS VERY LITTLE WEAR AND TEAR AND CAM AND CRANK WERE MICED, POLISHED AND REUSED..
ALL NOS STANDARD SIZE REPLACEMENT PARTS INCLUDING RINGS BEARINGS NOS SEALS AND TIMING CHAIN ETC...ORIGINAL HEADS
WERE REBUILT ETC. SHE RUNS STRONG WITH NO SMOKE OR STRANGE NOISES VERY WELL .HAS VINTAGE EDELBROCK STREETMASTER
383 INTAKE ALUMINUM WATER PUMP HOUSING AND EDELBROCK 1406 CARB. SHE STARTS WITH A TOUCH OF THE KEY AND RUNS GREAT
ON PUMP GAS .THE ORIGINAL TRANSMISSION WAS DISASSEMBLED RESEALED AND FLUSHED. HAS 323 FACTORY REAR...AN ESSENTIAL
UPGRADE WAS A CUSTOM WELDED DUAL FLOWMASTER EXHAUST -CUSTOM WELDED PIPES
3 CHAMBER MUFFLERS FOR THAT BAD BOY MOPAR BIG BLOCK SOUND!
NOS TIPS MAKES THIS BEAUTY A REAL THUMPER-SHE RUNS SMOOTH AND SHIFTS CLEAN. STOPS VERY WELL WITH MANY NEW
BRAKE PARTS AND LINES SO BRAKE PEDAL IS HIGH AND TIGHT. I HAVE NOT DRIVEN THIS BEAUTY MUCH BUT REALLY TURNS HEADS
AND A LOT OF FUN TO DRIVE. THE FRONT END IS TIGHT AND THE ALIGNMENT WAS SET WHEN THE TIRES WERE PUT ON. THEY ARE
225 70 14 AVENGERS ON CORRECT OEM MAGNUM WHEELS.
THE INTERIOR WAS ALSO RESTORED AND GIVEN NEW LEGIONARY SEATS, HEADLINER, CARPET AND DASH. THE CAR WAS NOT PUT ON
A ROTISSERIE AND NOT A SHOW CAR BUT VERY NICE DRIVER 8 OUT OF 10 QUALITY. ALL THE TRIM WAS REMOVED AND EITHER
RESTORED OR REPLACED. THE MASSIVE FRONT GRILL IS AS GOOD AS I HAVE SEEN FOR 51 YEARS OLD WITH NO REPAIRS. ALL THE
LIGHTS ARE ORIGINAL IN VERY NICE WORKING CONDITION.