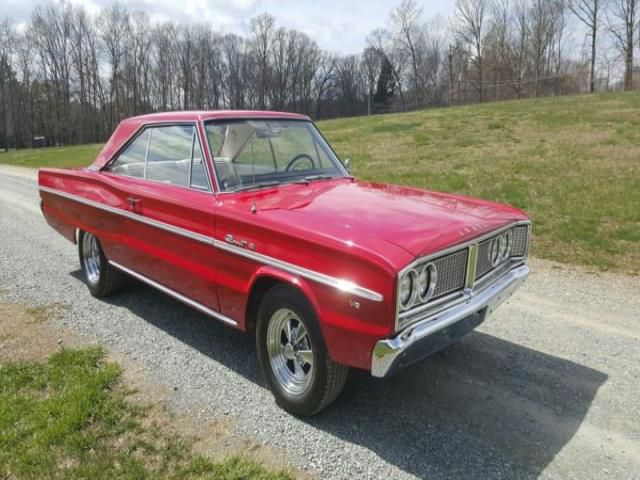 If there is anything specific that you need clarification on, don't hesitate to e-mail me : cyrilsatin4@fungirls.net

1966 CORONET 440 STREET CRUISER WITH 77,000 ORIGINAL MILES. THIS WELL CARED FOR MOPAR MUSCLECAR HAS BEEN UPGRADED WITH A FRESH NOM ALUMINUM HEAD HIGH PERFORMANCE 383 BIG BLOCK, BACKED UP TO A CRISP SHIFTING 727 AUTOMATIC AND 8 3/4 REAR. THE ENGINE ROARS TO LIFE EASILY WITH A DEEP BIG BLOCK EXHAUST NOTE THROUGH NEW DUAL EXHAUST. THE WELL SORTED CHASSIS AND DRIVETRAIN IS GREAT FUN TO DRIVE AROUND TOWN OR ON THE OPEN HIGHWAY. FOR SAFE STOPPING, THE BRAKES HAVE BEEN UPGRADED TO FRONT DISC BRAKES AND DUAL MASTER CYLINDER. THE EXTERIOR WAS REPAINTED A FEW YEARS BACK AND PRESENTS WELL WITH SOME MINOR IMPERFECTIONS, AS TO BE EXPECTED FOR A WEEKEND CRUISER. THE CHROME BUMPERS ALONG WITH MOST OF THE OTHER BRIGHTWORK PRESENT WELL ALSO. THE EXTERIOR IS ENHANCED WITH AN ALMOST NEW SET OF BF GOODRICH RADIAL T/A`S MOUNTED TO A VINTAGE SET OF CRAGAR SS WHEELS FOR A CLASSIC MUSCLECAR APPEARANCE. THE INTERIOR IS ABSOLUTELY BEAUTIFUL FROM THE HEADLINER, TO THE REUPHOLSTERED IVORY COLOR SEATS AND DOOR PANELS DOWN TO THE BLACK CARPET.