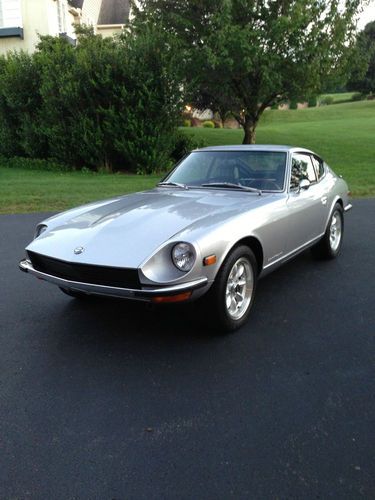 Up for auction is a very clean and very sharp 1971 Datsun 240Z. The car originally came from California and is very solid. I bought this car from a friend less than a year ago. He's an older gentleman that poured his heart and soul into this car, he spend a lot of money on the car.

I bought the car exactly as you see it but here's what I know about it.
The car has a 280Z motor that was rebuilt and has 4400 mile on it. It has a modified cam and a larger capacity aluminum oil pan. The original 4 speed transmission was replaced with a 5 speed and so were the rear end gears. All are from the 1978, 1979 era. (I have the original motor and rear end gears that go with car but not the original transmission)
Custom bucket seats (I have originals that go with car) The interior is excellent for the year, the passenger sun visor is signed by former race car driver Bob Sharp.
Custom wood steering wheel and shift knob (I have original steering wheel)
16" Panasport Racing Wheels
Custom dash gauges, the new speedometer was installed when the motor was installed and started at zero so this is the mileage since the motor was installed. I'm not positive of the body mileage but I may have the original speedometer showing mileage. I can check if anyone would like to know.
AM/FM CD player with remote control
Has front disc brakes
New shocks, ball joints, tie rods, and alignment.
This is just some of what I know but I can tell you that there are many other new items and I have a box of extra parts, new and old.
The car is very sharp, a real head turner. The engine compartment is beautiful, lots of polished parts and is super clean. The car is very fun to drive, runs great, drives straight, and stops perfect.
It does have a few blemishes that you can see from the pictures and is over 40 years old so if you look hard enough I'm sure you'll find some flaws.
Connecticut does not issue titles on this year vehicle so I will provide the buyer with the previous Connecticut registration and a Q-1 Bill of Sale form. (I never registered car)
Shipping is the responsibility of the buyer but I will be happy to assist with whoever you hire.
Please ask any questions and I will do my best to answer.
Good Luck!