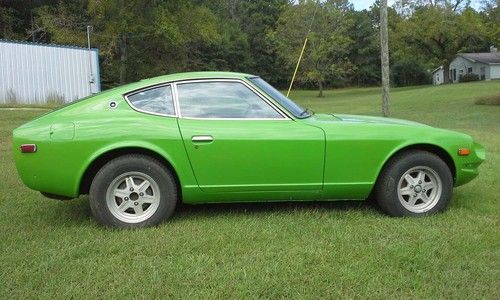 You are bidding on a 1978 Datsun 280Z with a Chevrolet V8 305 out of a 1987 Caprice Classic. I bought the car 4 years ago as a hobby car. I am moving and cannot afford to finish or transport it with me. It needs a few more interior pieces and fine tuning but it is rust free and fun to drive. I did not intend for it to be a race car of any kind so the engine is pretty original. It recently picked up a short that drains the battery. I just pulled the battery cable off to keep this from happening. I haven't had time to track it down and fix it. It should be an easy fix. (I mistakenly listed the engine as an '85 model, it is in fact an '87)

Under the hood
The original Nissan inline 6 engine did not run and I had a Caprice in the junkyard. The engine and transmission both ran great and were pulled together. The V8 engine is a 305 and I believe the transmission is a 700R4. I used the JagsThatRun motor and transmission mounts. The radiator is new and all aluminum, custom made for Datsun V8 conversions. I had a custom exhaust installed. It sounds beefy enough without being obnoxiously loud.
Exterior
The car was originally from California and had little rust. The main areas of rust were the doglegs and floorpans. The body was sanded down and all rusted metal was cut out and replaced. Any surface rust was sanded and treated with POR-15. The fenders and hood came from a 1974 260Z and were rust free. After the body was sanded and straightened it was sprayed with 2-part urethane primer and block sanded again. It was then sealed with a DuPont 2-part urethane sealer and basecoated with Chrysler FJ6 Green. Three coats of DuPont clearcoat finished it off and was then wet sanded and buffed. I have the front bumper from a 1974 260Z that will need restoring. I also have 240/260Z style fiberglass front and rear bumpers that have not been installed yet. I will ship all three with the car. The rims are the original factory 14" aluminum rims. I also have a set of four 14" chrome rims that need cleaning up but look great that I can swap or ship with the car. The tires that are currently on are Kumho Solus tires with less than 100 miles on them. I never got around to upgrading the brake or shocks system but I did buy replacement factory style rotors, calipers and pads with braided lines. The shocks are new factory style replacements. I sandblasted and repainted all of the original suspension and replaced all of the worn rubber with urethane. The windshield and back glass have new rubber weatherstripping. The exterior door locks were missing when I bought the car. I have new quarter emblems but all of the others are missing. All of the brake and suspension replacements are about 2 years old.
Interior
I am missing a few pieces from the interior. The seats and carpet are in good condition. The dash is cracked and will need replacing or covered with a full skin. The fuel, oil and voltage gauges work. The speedo and tach are not hooked up and will not work with the engine without modification. I was originally going to buy a GPS speedometer but never got around to it. The rear shock towers are missing their vinyl covers but may look good just painted black. I have two center consoles that need repairing but I will ship both. It needs a new steering wheel and shifter. Both doors received new rubber weatherstripping.
Overall the car is in good running order. I have driven it several times around town. It was fun and reliable and turned a lot of heads. Aside from the few missing pieces and battery draining I believe it is in great condition and all of these are easy fixes. It has been kept in a building for the past year and now I must pass it on to someone else. I am located in Lineville, Alabama and buyer will need to arrange for pickup or shipping.  I hope somebody can finish this car and have as much fun working on it as I did. Please message me for any other questions or details.
On Oct-02-13 at 16:22:26 PDT, seller added the following information:

Sold as is. Please email me for any addtional photos or info.