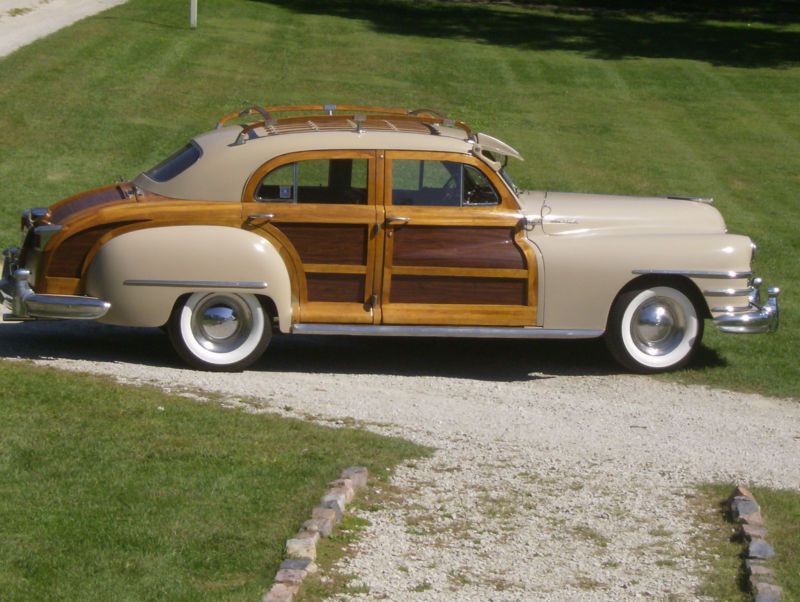 If you have questions email email me at: marionmffrieling@spoiltbrats.net .

They say that a picture is worth a thousand works and I do have several nice photos of my 1948 Chrysler Town and
Country 4 door sedan. But I am also going to give you the thousand (or more) words, I hope you enjoy them!
HISTORY OF THE CAR OWNERS
This 1948 Chrysler Town and Country sedan was purchased new on June 15, 1948 by Henry W. Breyer, Jr. who was the
grandson of William A. Breyer, the man who founded the Breyer Ice Cream Company. Henry was then living on an 80
acre estate on Old York Road in Elkins Park, Pennsylvania (Cheltenham Township). His mansion, which was built by
his father, Henry W. Breyer, Sr., in 1915, is now on the National Register of Historic Places. Breyer Jr. used the
woodie sedan to transport his family, guests and company’s executives as well as serving to commute him to his
office and factory in Philadelphia. Judging by the condition of the original carpets, the rear floor and the
driver’s side front were quite worn but the passenger side front was still in good condition. That would
indicate that Breyer had a chauffeur to do the driving and that he and his guests would ride in the back seat. In
1956, Breyer sold his mansion and it eventually became the offices of Cheltenham Township. The Chrysler was put
into storage where it sat forgotten and unused for some 24 years. The last license plate on the car (and is still
on the car) was of a 1956 vintage and the PA inspection sticker was also of that year. One of the last oil changes
done was with Invader Motor Oil and the mileage at that time was 69,792. That oil change was done in
Plumsteadville, PA according to the sticker which is still on the door post. Since the current mileage of the car
is 74,400, the car has had less than 5,000 miles added since that oil change which was probably done in about 1955.
In July of 1980, the car was purchased by Donald E. Rook of Pleasant Valley, PA and was added to his collection of
over 100 cars, mainly Chryslers and Packards.

Wish you had a world-famous auto exec give your commencement speech? Watch this

We've seen some pretty great commencement speeches over the years. There was Steve Jobs' incredibly inspiring Stanford address in 2005, John Stewart's insightful speech to the graduating class of William and Mary in 2004 and Steven Colbert's hilarious 2011 address at Northwestern, but automotive executives aren't strangers to honorary degrees. Former General Motors CEO Rick Wagoner spoke at Virginia Commonwealth University in 2011, and Chrysler CEO Sergio Marchionne recently gave the keynote at Walsh College's 100th Commencement Ceremony. The executive knows a thing or two about success and following one's beliefs to fulfillment.
"I constantly encourage my co-workers at Fiat and Chrysler to go beyond the cliche and the conventional to try new approaches and change perspective each and every day," Marchionne said. "I exhort them not to repeat the same things, the same approaches, and I remind them they are indeed free. The freedom I am talking about is something inside you. It is determined by how open minded you remain, how receptive you are to the new and to the different, to the infinite possibilities that present themselves even if you don't go looking for them or could never have imagined. Being free means that you have the strength not to be conditioned by what others want you to do or by what may seem to be the easiest choice."
Amen to that. You can check out the brief press release on the address below as well as a video of a few highlights from the speech.