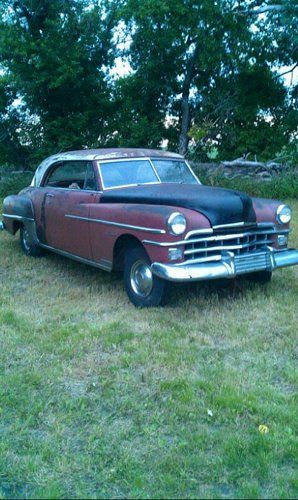 Condition: UsedA vehicle is considered used if it has been registered and issued a title. Used vehicles have had at least one previous owner. The condition of the exterior, interior and engine can vary depending on the vehicle's history. See the seller's listing for full details and description of any imperfections.Seller Notes:"Normal Wear and tear, needs to be restored"

Up for auction is an all original "barn find" 1950 Chrysler Windsor Newport 2 door hardtop.  This is one of 2800 produced.  It is a rare car for the fact that the top is removeable and is the same body as a convertible, woody, and Town & Country.  The windshield is referred to as an "airplane windshield," meaning the top just sets on top leaving a factory finished convertible style windshield frame and posts.  They only produced this style for 2 years.  The body is very solid with the exception of the right rear floor pan (pictured).  I'm guessing a battery was stored and possibly leaked a little. The trunk is solid with very little rust, (a little under tail light---pictured).  There is a crack in one half of windshield and drivers side window.  The interior is all there, but just like the rest of the car it is in need of restoration.  There is no engine or transmission in it, so it could go either original or modified.  I am selling this "As Is" for a low reserve.  I will accomodate the buyer in storing it for as long as it takes to arrange delivery.  I will also assist in loading.  Please view the pictures and feel free to ask me any questions you may have.