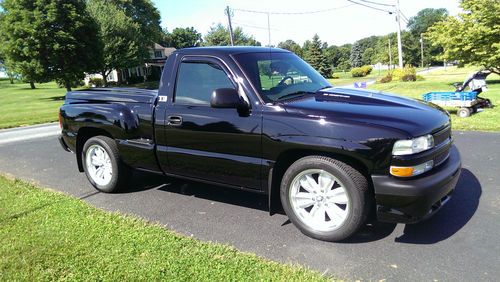 Condition: UsedA vehicle is considered used if it has been registered and issued a title. Used vehicles have had at least one previous owner. The condition of the exterior, interior and engine can vary depending on the vehicle's history. See the seller's listing for full details and description of any imperfections.Seller Notes:"Showroom and never had any paint work. Small paint chip on driver side mirror."

2002 Chevy Silverado 1500 Earnhardt T3 built by DEI and sold only at Earnhardt Chevy.  5.3 V8 and Auto Trans w/ shift kit.DEI built 8 of these and Teresa signed all 8 and kept 1 for herself so 7 are on the market.  DEI installed K&N air intake, Edelbrock IAS suspension, black graphite leather bucket seats, cowl hood with 315hp marks, hp can be changed to 375 with controller, 20x8.5 American Racing wheels, Carbon fiber dash kit, enhanced PCM program, color matched Tahoe grille, and hand tuned by DEI, .  I added a hard painted cover with carpet, bedrug liner, Tape deck to fill gap from floor to console, mud flaps for PA roads.  This truck is in showroom condition and always garage kept in climate control building.  It has a small paint flake on the driver side mirror.  I have over $45,000 invested an is an 1 owner show truck.