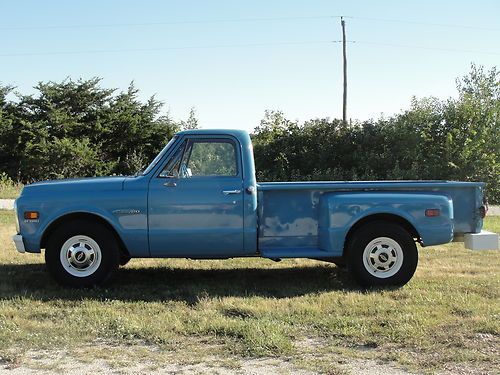 I have a beautiful all-original 1972 Chevy C20 2WD step-side longbed pickup for sale. Owned by one family and has 62,900 original miles.  It has fresh paint in the original color, new rockers, all rust on fenders has been removed.  It also has new plugs, wires, points, condensor, distributor cap, rotor cap and dual exhaust. Four barrel carb has been rebuilt. Wood bed is original with a few minor defects.  It has power front disc brakes. Does not have power steering or radio.  This truck runs great, and is a great driver.  This is a very rare truck, being a longbed step-side.  Just under 4,000 were made in 1972.  I have the original warranty paperwork from when it was purchased.  Thanks for looking!  660.676.2714.