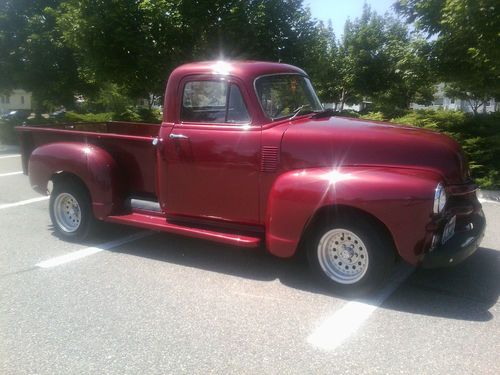 Condition: UsedA vehicle is considered used if it has been registered and issued a title. Used vehicles have had at least one previous owner. The condition of the exterior, interior and engine can vary depending on the vehicle's history. See the seller's listing for full details and description of any imperfections.Seller Notes:"Up for sale is a 1953 3100 pickup. It was painted about 10 years ago and the paint job has a few nicks, scratches and chips, but not many and its hard to see them. No rust that I can identify, and there is one spot (1"x 1.5") that could use fixing by dvr door. It has a great classic look, a smooth running 350 and great shifting automatic. It has a Camero rear end, and cruises at 75mph no problem. The frame and all the body is original and straight. This rat rod truck is as cool as they get and able for daily duty, its not show quality, but dang close. It gets a lot of attention and looks and it would not take much to make it show quality. The interior looks good, but the seat will need recovered. The floor is great and all in tact, it also needs some of the gauges hooked up, but the important ones are there. Great heater, no A/C, but vent works good. It will keep up with interstate traffic with no problems, is quick, and sounds great with the dual exhaust. A classic with class."