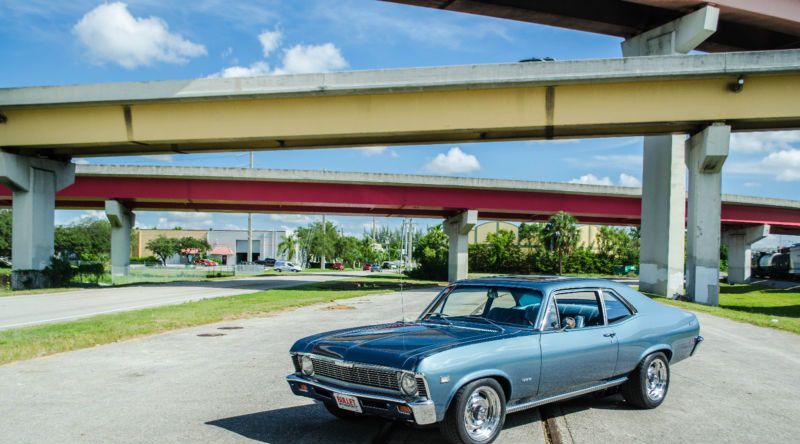 For more details email me at: vicentaviihrke@ukflorists.org .

1968 Chevrolet Nova Pro-Touring
Description:
This jaw dropping 1968 pro touring Nova is flawless in every aspect. Its killer engine/transmission combo will
leave a permanent grin on your face every time you put your foot down. The exterior, interior, and underside are
all extremely well done, everything on this car has been rebuilt, replaced, re-chromed, re-polished, and painted.
You will not find another Nova out there that’s as clean as this one.
Interior:
The interior of the Nova is exceptional and tastefully matches its metallic blue paint. The carpets, headliner,
dashboard, and seats are all in mint condition and that 6-speed Hurst short throw floor shifter looks great as the
centerpiece of the interior. There is an aftermarket radio installed in that sounds fantastic, and there is also a
custom sunroof that doesn’t leak at all and looks like it’s factory.
Exterior:
The exterior, as stated above, is “flawless”. In the sun, the paint has a wet look to it that is just sublime.
There is not one bit of rust on this car, the body is as straight as an arrow, and the panels fit together
perfectly. Those 16″ Vintique billet Rally wheels also complement all of the chrome trim and that beautiful
paint job. The bumpers have been rechromed, all of the trim has been repolished, and the same goes for everything
under the hood, not a single detail was overlooked on this ’68 Nova.
Drivetrain:
The heart of this monster is a fully built 377 ci V8 that sends power through a Tremec T56 Magnum 6-speed
transmission. The engine is a 4-bolt main 400 small block that was destroked to a 377 with a 350 Crower crank and
rods, 11:1 Arias pistons, an excellent solid roller Crane cam, 208 intake Brodix heads, Victor Jr. intake, and a
750 BG carburetor, all flowing through Hooker headers and a full 3″ dual exhaust, all ceramic coated black.
Towards the rear is a reworked gas tank with dual pick-ups, frame ties, 3.73 gears, posi-traction and Moser axles
in a 10-bolt rear end. All of that results in 400 hp at the rear wheels, and that’s before you engage the
nitrous system. The car also has heavy-duty leaf springs, Koni shocks, and Baer disc brakes all around.
Key Facts:
Starts up every time with ease
Fully restored to perfection
Fully built 377 ci engine
Absolutely no rust
Tremec T-56 Magnum 6-speed
Pro-touring fun at its finest