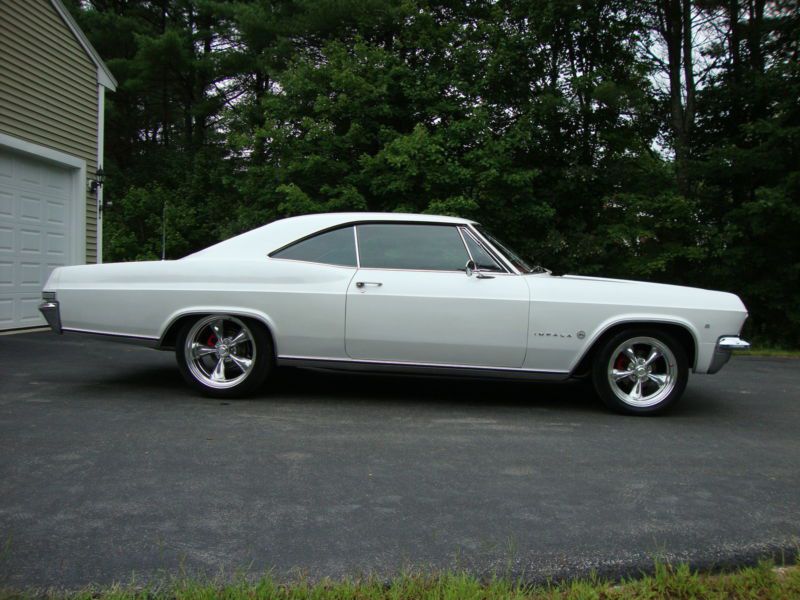 If you have questions email email me at: geneviegrromjue@ukvet.net .

Beautiful 1965 Chevy Impala 2 door
hardtop!! This car has had a professional full frame off restoration done on it and I have photo's and recites.
Started off with a Arizona 76,000 original mile car. Body has all super straight body lines. The paint is a Kustom
Pearl White with a mile deep hard shine. Looks very nice and sweet in the sun light. All new bright red interior
witch looks fantastic and beautiful. All gauges even the cold light works. The radio does not work. All the glass
and trim are in mint condition. Has a rear mounted radio an tanner and dual chrome door mirrors. The frame and
inner front fenders have all been powder coated. Front and rear suspension are all so powder coated. Has all new
front end parts as does the rear suspension also lowered. Has power four wheel disk brakes with drill rotors on all
four corners. The kustom American Racing wheels are 18x8" in front and 20x10" in rear looks killer and has a great
stance!!! Motor is a rare 409/400 with aluminum water pump and billet pulleys solid lifters heads have been up
graded with 7/16 screw in studs and Roller Rockers also factory and aluminum intake with factory stock carburetor
and up dated ignition. Still retains it's factory exhaust manifolds with full dual exhaust. Has polish tall
aluminum rib value covers and air cleaner old school looks sweet! This is a correct date coded motor for the 1965
Impala. Has a new Muncie 4 speed transmission back up by a 12 bolt posi rear end.