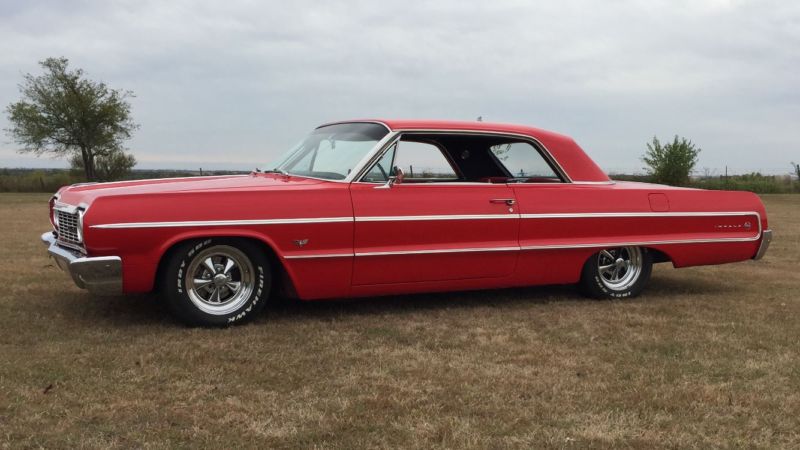 This is a factory air car with the original 327 engine bored over to a 383 stroker with about 5,000 miles on it. Replaced original power-glide with a 700R-4 automatic transmission. Magnaflow exhaust system, exits in front of rear tires for great sound when cruising. New 1806 Edlebrock 650 Thunder Series carburetor with electric choke. A couple pumps and the car starts right up and runs great.
Upgraded front and rear suspension with global west tubular upper and lower control arms as well as the rear trailing arms. Car responds perfectly. Front has 2" drop spindles with new springs, back had one ring cut from springs. Replaced the steering assist to 605 steering box. Added chrome booster and disc brakes on the front with 13" slotted rotors for added breaking safety. Original drums are still on the back. Currently riding on 15" Cragar SS wheels with matching spare. Just over 6,000 miles on Firestone Firehawk tires.

Car was repainted with all new weather stripping along with new windshield and rear glass. All exterior trim has been replaced with brand new chrome. Interior is in great shape with new carpet, door panels, as well as front and rear dashes. New radio with aux cord and new speakers in front and back recently installed. Car has a unique, custom gauge cluster. Gauges were custom made by Auto Meter and have red LED backlights.