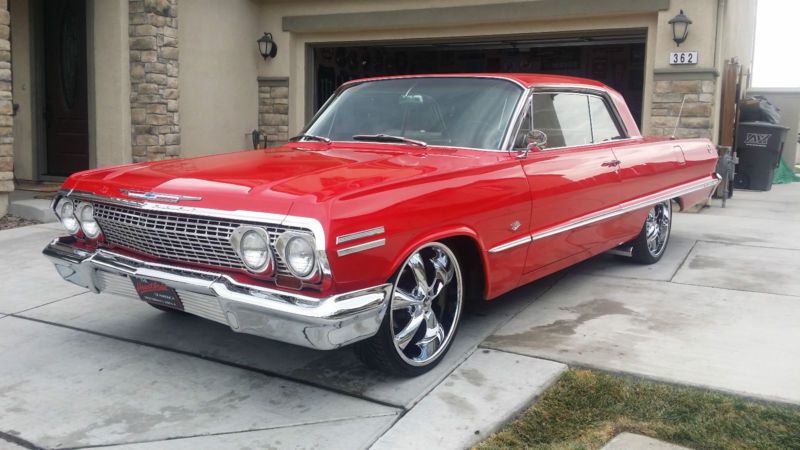 1963 Chevy Impala. As you can see by the pics below this car is in very good
condition in & out. Below I will try and describe exactly what I see and know about this car.
Starting with the Outside : 2 year old 2 stage Fire engine red paint job sprayed over a laser straight and rust
free body...shows really well. Lots of new exterior trim including headlight bezels, hood lip molding, hood
emblem, front fender moldings, parking lamp lenses, all taillights, trunk molding, trunk and quarter emblems, and
both corner stainless pieces are new. Both front and rear bumpers were also rechromed and look real nice. The front
grill and side moldings aren't new but still in real nice shape. All glass looks to be the original and still in
great shape with no visible scratches or cracks. All headlights, taillights work as they should.
****Please note*** Exterior Close up pic of front end stainless is just dusty but all new.
Inside : Also redone at the same time the car was painted. All new seat foam and black front and rear seat covers,
new door panels, armrest bases & pads, carpet & Impala floor mats, door sill plates, all pedal covers, e-brake
handle, inner door handles, etc, etc... You get the point. Also, dash & steering wheel were pulled out and totally
refurbished and repainted black. All dash guages & electrical lights work as they should. Car also comes equipped
with a newer Vintage heat & air conditioning unit that works great. There's a nice aftermarket stereo system with
cord connector for your phone to play your downloaded music, eq mounted under dash and a nice sub and amp in a box
in the trunk.
Motor & Transmission : Newer Crate 350-330hp motor