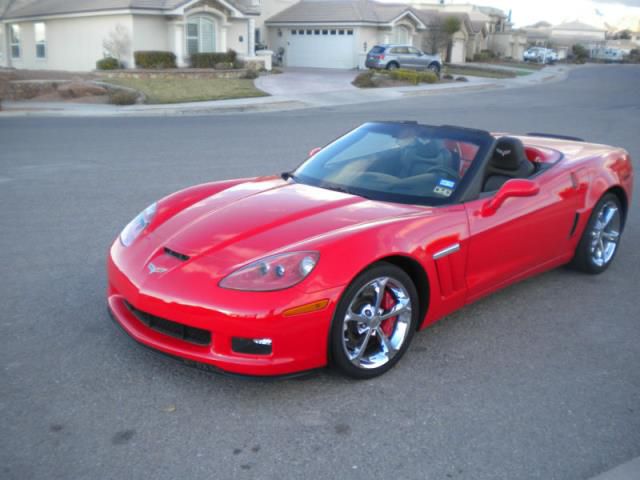 Automobile purchased new at Bud's Chevrolet, Saint Marys, Ohio, 29 March 2012 by its first owner who drove it 1,800 miles before trading for a new Corvette. I purchased it Chevrolet Certified on 05 June 2014 in Maryland and drove it back home to El Paso, Texas. Accordingly, five months of bumper to bumper factory warranty remain, plus the remainder of 5 years or 100,000 miles of power train warranty and roadside assistance protection measured from 29 March 2012 or 4,519 miles odometer presently. I am informed that along with its Certified status, it qualifies for 4 free oil changes at any Chevrolet dealership. The Grand Sport carries wider front and rear fenders to accommodate its very wide tires. Chrome aluminum wheels are 19" rear and 18" front. With the large fender air vents forward and air scoops rearward plus distinctive air scoop in the hood frontal, the appearance is a serious step up from the standard base Corvette. The 6.2 V8 engine is among the very fastest, yet it gives 26 MPG or better at highway speeds. The six speed automatic transmission probably contributes to its fuel efficiency. I am informed the automobile is fully-optioned except for MagRide, which was not recommended unless one planned to "track the car" which I certainly didn't nor do most others. This is a gorgeous automobile that clearly elicits admiration wherever it goes. Here is an opportunity to have one of the finest, in near-new condition, for a long way down from its original price. I have the original window sticker 73,830 as well as the Chevrolet Build Sheet. This is essentially "a two collector-owner car".