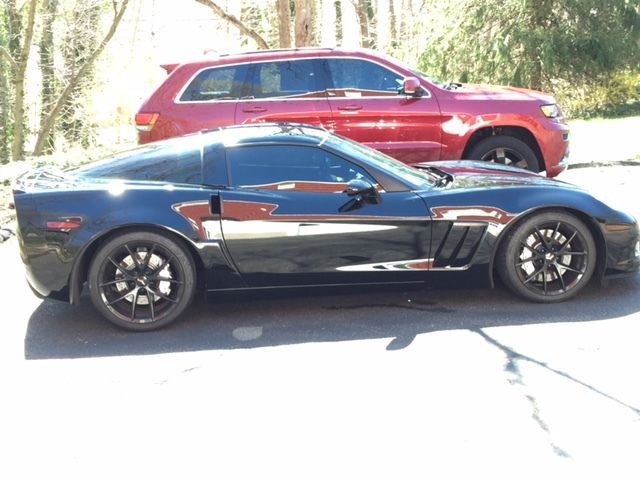 If you have any questions feel free to email: lizalaabbas@ft6.com .

2010 Corvette Grand Sport 3LT. Clean CarFax.
Black paint with black and gray two tone interior and black Z06 rims. Crazy thing is that it looks even better in
person. LS3 V8 engine with 436hp.
The vette has a manual transmission and has just under 29,000 miles currently. It is basically stock with the
exception of tinted windows, black Z06 rims, new NAV screen with bluetooth and backup camera (which is extremely
helpful), and full exhaust (kooks/corsa).
Factory options include heads-up display, heated seats, memory seats, NAV, removable targa top, Bose speakers and
more.
I am the third owner. The car started its life in Maryland and I bought it from a dealer in South Carolina (trailer
pic above is delivery day!). Car has been babied. Not driven in rain and has lived in a heated and cooled garage.
Runs and drives great and has not been abused. Plenty of life left in the tires. $70K car when it was new. One of
the best looking Grand Sports out there and $25K cheaper than a similarly equipped C7.
Absolutely great car and I have really enjoyed it but twins on the way means that the vette has to go. Weather is
getting warmer and this car is great for cruising with the targa top off and running through the gears in the warm
weather. Put in an offer. You'll be glad you did.