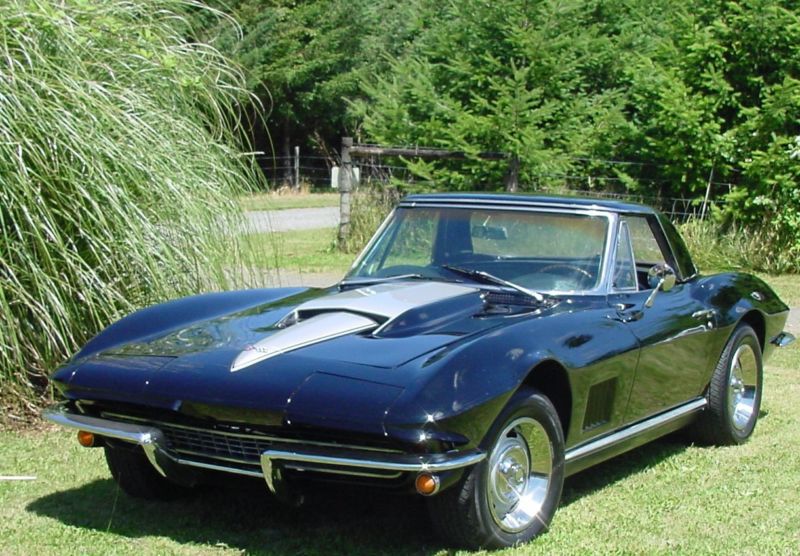 Please email me with any questions or requests for additional pics or something specific at: rafaelamccloughan@juno.com .

FOR SALE:  A "RUST FREE" 1967 Corvette Convertible with Factory Hardtop, just out of 12 year storage. Has 1967 Big
Block Hood, V8 (4bbl) Small Block Chev. N.O.M. (NOT ORIGINAL MOTOR), car has a LOW RPM Redline Tach. So it was
originally a LOW HP Base engine car.  Now has a replacement V8 motor, looks some what correct but is just a
standard small block V8 Chevrolet engine. Good running little small block, does not smoke, runs good!  Muncie 4spd
(ORIGINAL to car), Posi. Rear End (ORIGINAL to car), Factory ORIGINAL Power Steering, Very Rare Factory Tuxedo
Black car (Coded 900), new black carpet kit. Speedo shows 47,417. miles, ORIGINAL? Maybe, who knows, we will have
to assume it is 147,417. Suspension/bushings looks to have been rebuilt/replaced, Tires are like brand new, Has its
original AM-FM Radio (does not work). Two gauges (Amp. gauge and Clock) look to have been replaced as the needles
are bright and not faded. (Clock works!). I have just installed new Alternator, voltage reg. and starter. Car was
tuned up and engine fluids changed. This Corvette runs great, drives nice and tight and stops very good. Was
originally a two top Corvette and will come with the Factory Hardtop, Soft top is long gone! (Missing Soft Top).
Overall this is a nicer UNRESTORED Driver quality TRIPLE BLACK 1967 Corvette with Flared Fenders, Extremely SOLID
beautiful RUST FREE Frame (see last Pic. NICE!) and Bird Cage, overall the Fiberglass looks original and mostly
unhit, but has been flared. Does have some minor fiberglass cracks in the normal areas, most other cracks are in
the front flare areas. Paint is a older repaint in its original black color, Paint is bright and shinny but has the
normal nicks, chips, scrapes, scuffs from years of storage and use, plus looks to have had a "70's" pin stripe at
one time as if you look at it in the right light and angle you can see the tape line. I just got this Corvette in
and do not know a ton about it. Do know the previous owner had it in dry storage for the last 12+ years. Pictures
make the car "look better" than it truly is in person. (Just being Honest)  I would have "WAY MORE FUN" in this
Corvette than my restored Corvette, I worry about it when ever it goes out. Can't keep everything.  With that
being said it is still a very solid, very restorable, nicer looking (gets thumbs up when ever I take it out!)
Factory Black  "Driver" 1967 Corvette Convertible. Has the very common minor issue on the title vin number, car
act. vin number is 194677S116463 * Oregon title shows 1946775116463 someone with sloppy hand writing, and DMV
mistook the S for a 5, not a big deal, have dealt with the same thing multip. times, Just
needed to let you know.