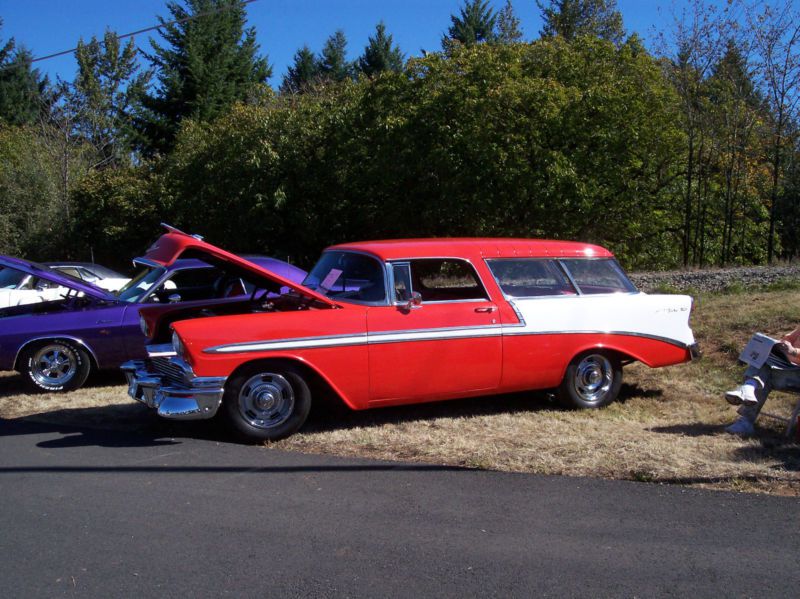 1956 Chevy Nomad in very good condition. This is a beautiful driver with a stock 350 four bolt main block, big
heads, w/nice cam, Edelbrock carb and intake w/headers (installed at 98,000 miles, so no more than 3,220 miles on
rebuilt engine, Tuned by Bob and Nick Jennings in So.Cal), backed by a 700r overdrive transmission (rebuilt and
installed with less than 1,000 miles), with glass-packs out the sides. The stunning matador red/(orange) paint is
around 15 years new and always garaged. It does have a couple small spots blistering in the front lower fenders,
the rear tailgate and lift gate area have not been restore completely. The interior was restored to 100% stock
condition two years ago from the metal up, with zero rust on the inside metal (except for the wheel well, which was
repaired when the body was painted), everything was sealed with POR 15, new head liner, new seats with new seat
belts where installed, new door panels, new window regulators, new door locks, all the interior chrome was
re-plated, new carpet with insulation, and a new electrical harness under the dash. The only thing not stock is the
stereo with speakers in the kick panels. Michelin tires have lots of tread (215/75/15) with Rally Rims all the way
around . Most of the outside chrome was re-plated, but some exterior pieces have light pitting as seen in the
photos. Windshield is crazing a little on the lower left driver side (see photo). This car starts fast with the
electric fuel pump, runs, drives, stops, and is a "quick" fun cruiser. This was my grandfathers car, and he
purchased it in 1957 from the first owner. Clear title with zero accidents.