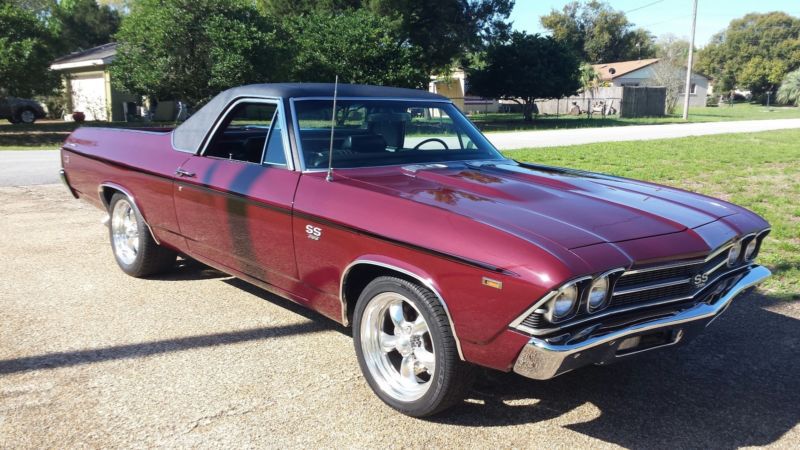 SOMETHING DFFERENT!!!RARE INVESTMENT...L78.Original SS 396 375 hp ,4 speed M22 with 12 bot 373 posi restored with
only the best of care... 1969 special order SS El Camino..JD code on block .snowflake intake with the original 800
cfm holley.. Could possibly be the last of this era in color and power options ordered.. I have found this car in a
storage unit that hadnt been on the road since 1975. It was originally a California car . It was in rust free solid
original shape but needing reconditioning mainly from sitting the long period of time.. This is NOT your slapped
together El camino ..It retains all the original body panels never in a collision of any kind..Frame is perfect not
even a pit. It was soo amazing I decided to restore ONLY what needed restoreing and retaining any original parts
that were important.. The original color was burgundy with a black vinly roof and black vinyl benchseat . with 4
speed .. I can honestly say I think the mileage of 15600 is the original miles..this is the original seat,dash
gauges,carpet,even the original radio with speaker I boxed up and replaced as new.. also the original muncie
shifter and all the linkage is as new but replaced for driving purposes with a Hurst Comp plus ...The motor was
completely gone through and rebuilt to the hilt also retained all the internals.. I cant explain how awesome this
motor is you really have to see and hear it in person... Many El camino SS cars came with the 325 or 350 horsepower
but anyone who knows the 375 is a all together different animal and was grossly underated.. I enjoyed doing this
car and bringing it back to the life it deserves and is truly a great investment for someone who appreciated
verrrry rare cars .. You may never ever see another one as beautiful and as original as thi Do your homework first
and see if you can find another one like this it surely will be hard MATCHING NUMBERS 396-375 hp with M22 original
matchin muncie shifter and a 12 bolt 373 12 bolt posi..