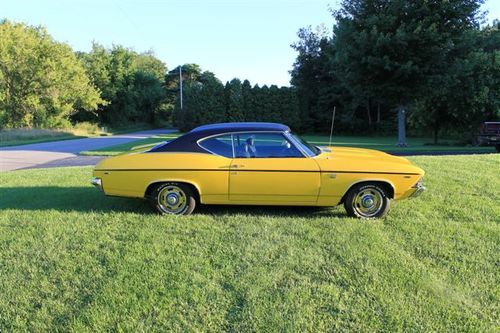 Condition: Used: A vehicle is considered used if it has been registered and issued a title. Used vehicles have had at least one previous owner. The condition of the exterior, interior and engine can vary depending on the vehicle's history. See the seller's listing for full details and description of any imperfections. ...
1969 Chevelle SS Clone- Restored
Paint: Daytona Yellow with Reupholstered Black Seats
New Black Vinyl Top
Bucket Seats
SS Trim & Hood
Engine is 454 with a Comp H.E. Cam
Automatic Rebuilt Transmission- 350 Stall Converter 2500
Rear End 12 Bolt 331 Gears
Front Disk Brakes
Factory aftermarket Tach
Ceramic Headers
3 inch Exhaust with flowmasters
15" Rally wheels that match body
New Carpet, Headliner, Door Panels, Reupholstered Seats, and New Vinyl Top! Over 30K invested
Car originally a Southern Belle from Tennessee, relocated to Indiana and Garage kept and covered
Have over 50 pics, so if you would like more, please message me with your email address