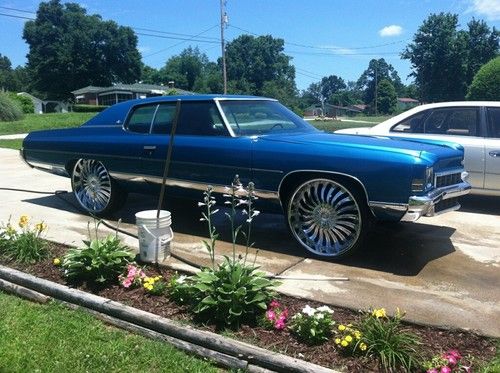 This is a 1972 caprice that is bad to the core. It has been completely redone from top to bottom, nothing has been passed up on. The motor was rebuilt, it is a 350sbc bored over cammed and sounds loud and amazing. The motor has full exhaust system and has msd ignition. The transmission was rebuilt to go with the motor it is a 350 turbo. Now to the paint and interior, the paint and the interior have both been completed with in the last 2 two months. both are in  amazing condition and have no problems, The car has been modified to have a floor shifter and a console that houses the gages for the car. This is a bad that I have spent alot of time in and it will make an amazing car for the next person. Just dont have the time anymore to drive it at all seeing that i moved to the other side of the country, So my lost will be somebodies gain.