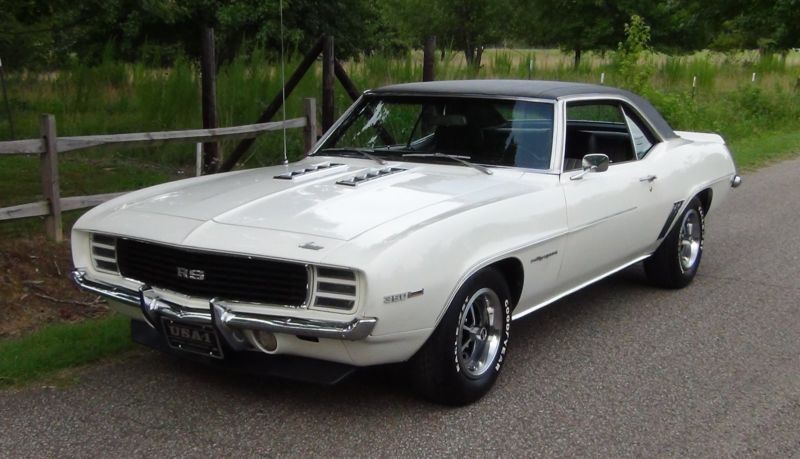 For more details email me at: pamulaplluskey@clubporsche.com .

HARD TO FIND CAR IN THIS CONDITION

THIS CAMARO IS A RARE FIND IN THIS CONDITION WITH ALL OF THE SPECIAL ORDER OPTIONS. CAR WAS BUILT THE 2ND WEEK OF
JANUARY 1969.

CAR WAS REPAINTED IN 1981 INCLUDING HAND PAINTED PIN STRIPES. IT STILL WEARS THE ORIGINAL VINYL TOP. CAR IS VERY
STRAIGHT AND VERY SOLID!! DOORS OPEN AND CLOSE LIKE NEW.

INTERIOR IS IN NICE CONDITION WITH THE CARPET ONLY SHOWING MINOR FADING, VERY NICE LOOKING SEATS. DASH PAD HAS NO
SIGNS OF CRACKS AND LOOKS GOOD.

FUEL SYSTEM HAS BEEN CLEANED OUT, CARBURETOR RECENTLY REBUILT AND NEW BRAKES ON ALL 4 WHEELS. CAR IS SITTING ON
ORIGINAL GOODYEAR EAGLE ST TIRES THAT WERE PUT ON IN THE MID EIGHTIES. TIRES ARE IN GOOD CONDITION AND HAVE GREAT
TREAD. CAR CRANKS EASY AND RUNS GOOD; GOES STRAIGHT DOWN THE ROAD.