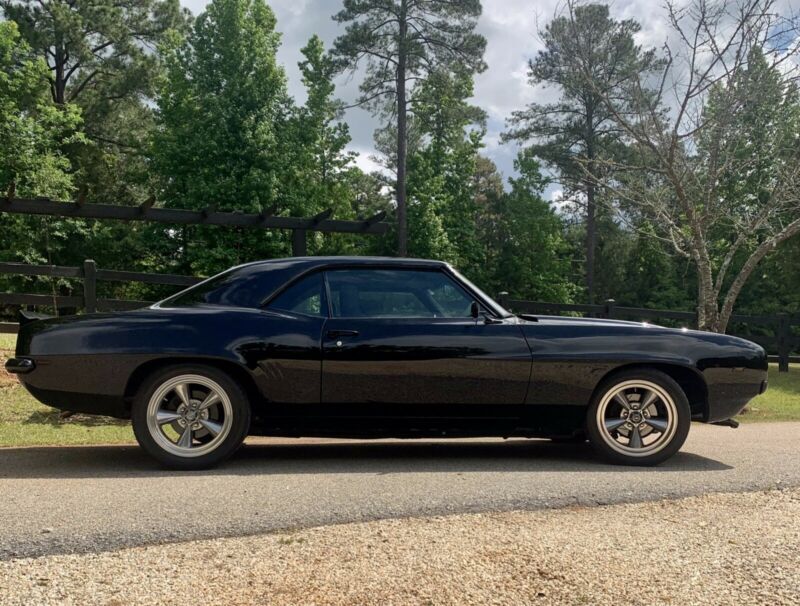 TH350 ( 3 speed) transmission rebuilt in 2014, in May was drained, new JEGS filter replaced, gasket, and refill
with Valvoline Sythetic. A new stainless Lokar Kick-Down cable was also routed to the carburetor. New vacuum lines
to carburetor were also ran. The output shaft was also replaced.

Headrest were removed and driver’s seat was mounted back for a tall man (can be put in factory mounts). The rear
seat is orignal. Front and rear seats were wrapped in charcoal leather (not vinyl), and sewn/seamed to match the
1969 style. The front seats have integrated 3 point seatbelts. The rear has 3 new GM lap belts. The leather is in
good shape, and shows normal wear fro 3 years of use. The car smells good inside.
Classic Air Industries R-134A ac unit with heater core was added. The unit was inspected and blows cold and fast.
New high loop black carpet installed with front and rear door panels,headliner, and majority of the rubber was
replaced, (although some is orignal)
Painless wiring fuse block (modern) and flashers were installed with all new wiring from the front to the rear of
the car.
Retro Sound AM/FM/AUX stereo with Kicker speakers and crossovers give plenty of sound from the rear deck. There are
no front speakers. It is not my place to cut holes in kick panels or doors. The sound system is plenty good. The
antenna is hidden under the dash board and no external antenna is present.
All dashboard indicators work,turn signals,high beams, and HVAC also work flawlessly.
Center console is original, but is functional and painted black (to eliminate the wood drain). Glove box has a new
insert, and ashtray/lighter are also new. Rear ashtray was glued shut ( common fix for metal or metal rattles). It
also needs a new dome light lens (also original).


Body:
New front clip sheet metal from AMD. Flat painted Spoiler from AMD. All other metal appears original from the doors
back. The car was blasted, body worked, block sanded, and coated in red sealer and topped with GM tuxedo Black 3
times and a single coat of PPG clear. The car was wet sanded and buffed.
Thé side glass is original. The front rear windshield are new installs (glued not gasket).
There are a few flaws in the paint, they are all very minor in my option:
Passenger front fender: A rock from the freeway landed in the middle top of the fender. The metal is not dinged,
but it did take off to the primer. It was filled with touch up paint, and looks acceptable. It was lightly color
sanded and buffed, and cloud use another pass.
Thé driver’s door has a revers ding above the handle. The car was slim-jammed after keys were locked in by a bad
tow man. The ding can be removed, but the entire interior panel shells are covered in sound deadening materials and
is very labor intensive to remove.
There are some paint chips from normal use on the car, but they are very inconspicuous.
The floor pan had a layer of undercoating applied, and new drain plugs installed. Everything under the car appears
correct and true, as does the subframe, cables, cross members, mounts, and cables.
As mentioned before, the interior had sound deadening materials placed from the front to the rear, floor to the
roof. It is a generic “Dynamat“, but just as thick.
The trunk pan is original, and was re-painted upon restoration with gray splatter style fleck.
All emblem holes were welded and filled. The front nose Camaro emblem was powder coated black. All chrome trim was
painted black (bumpers, window molding, hard ware). All stainless trim was brushed stainless (grill and window
channels). The rain gutters were painted black. All new corner light with black bezels. Original rear tail lights.
Door handles were painted black, as well as the side view mirrors.
The body gaps are very clean, the doors,trunk, and hood close with one swing.