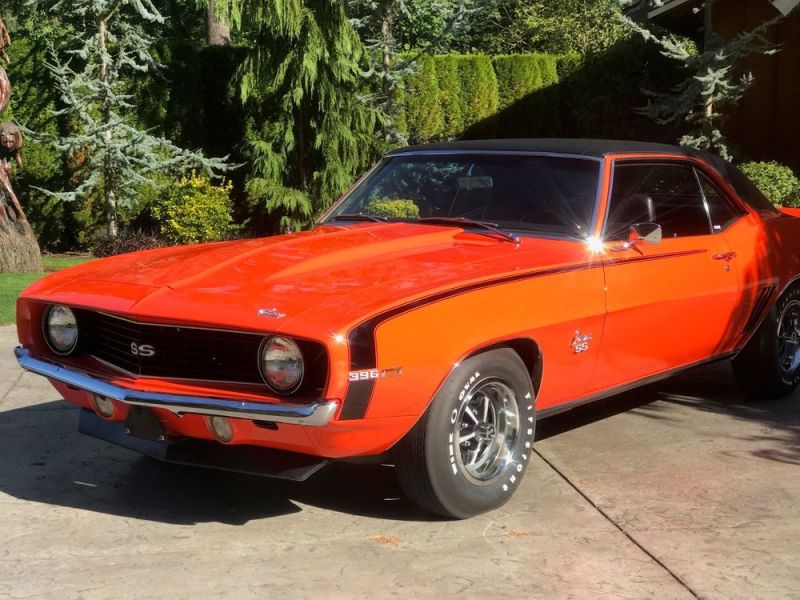 I am always available by mail at: harrishssmudrick@cricketfans.net .

1969 Chevrolet X22 SS Camaro.
Powered by L89 396- 375HP BBC.
Bored over at .040
Hooker Headers
This restoration was done top notch, both mechanically and cosmetically, it is finished in CODE 72 Correct OEM
hugger orange with a B Code Black vinyl top.
12 Bolt rear end, 3:73 gears
400 turbo automatic trans
Correct F7014 tires with Correct 14x7 SS wheels
Gauge Package
854 block, correct 842 aluminum heads and correct 163 intake., all brightwork, correct floor mats, correct shocks,
new 12-bolt rear end with 3.53 gears, 400 transmission, battery cables, correct color and interior.
What truly sets this car apart and makes it so rare is its TWO Stamps on the motor block....
It was originally Stamped T0916KE, this would make it a L89 ALUMINUM HEAD MOTOR with a RPO MA6 Dual disk clutch..
Chevrolet never ended up making a 1969 Camaro with a dual disk clutch... This block was then changed to the CE
block with T099 (SEPT 1969) stamped down by the starter bolt holes in Tonawanda in September of 1969.
This is a very REAL and True L89 warranty block, it is extremely RARE. This is the real deal and not a re-stamp.
Truly one of a kind.
This car and block have both been discussed extensively on Team Camaro Forums.