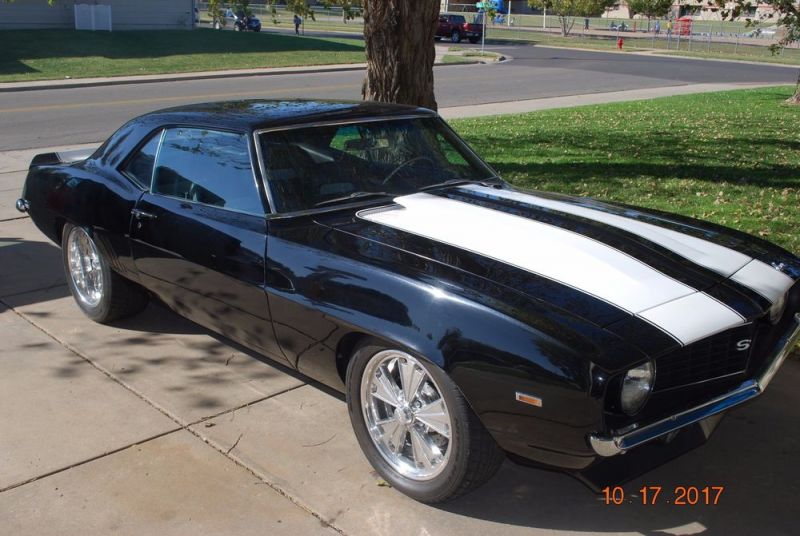 If you have any questions please email at: otisoffabiano@oneuk.com .

69 Camaro with a LS1 Motor, 6 speed. New 9" Ford rearend with a 3:70 posi. Hotchkis suspension front and rear. 18x8
Boyd Coddington billet front wheels with 235/50/ZR18 nittos on front. 18x11 wheels with 295/45/ZR18 nittos in the
rear. Car is new from top to bottom and built at the best professional shops in Wichita. Body and black paint
perfect, removed drip rails and smoothed firewall. Wiring all new starting with new factory harness and fuse box
then tied in LS wiring and computer and put under console. 15K spent on interior alone, new seats, foam, seat
belts, custom console. Blue tooth stereo with speakers on kickpanels and rear panel and amp mounted between rear
speakers hidden in trunk. Many hours spent keeping all wiring hidden as much as possible. Car professionally wired
with all required fuses, relays etc as required. Approx 880 miles put on the car since completed. Dakota digital
gages, colors can change, right now all lighting in car set to blue. 67 Corvette original steering wheel. Wildwood
4 wheel disc brakes. Lokar emergency brake hook up and cables. Hydraulic cluth works perfect. Vintage ac system.
Car drives on the highway perfect, 80 mph about 2k rpms, ac has to be on low or will freeze you out. All chrome on
car is new. Glass is new, no rust, body is straight and shines as a show car should. Flowmaster 40's with 2 1/2"
aluminized exhaust dumping right before rear end. Leaf springs in the rear were relocated in ward as far as
possible to allow the large meats on the rear to clear and then mini tub accomplished. Rear seat is still factory
size. Wheel tubs look excellent. All lighting is new. Steering column is new, chrome and tilt wheel. Just rambling
off things as i think of them. Have 75k in receipts. Car looks and sounds amazing. Gets compliments wherever it
goes. Starts right up and i can drive it anywhere, running nice and cool inside and motor runs cool as well. Took
it out many times in our Kansas 110 degree weather and never had a issue. Have a 2006 Magnum SRT8, 77 440 Dodge
Warlock and a 2004 Rubicon for sale as well and am wanting to buy a 2013 or 14 Ford F250 6.7 diesel.