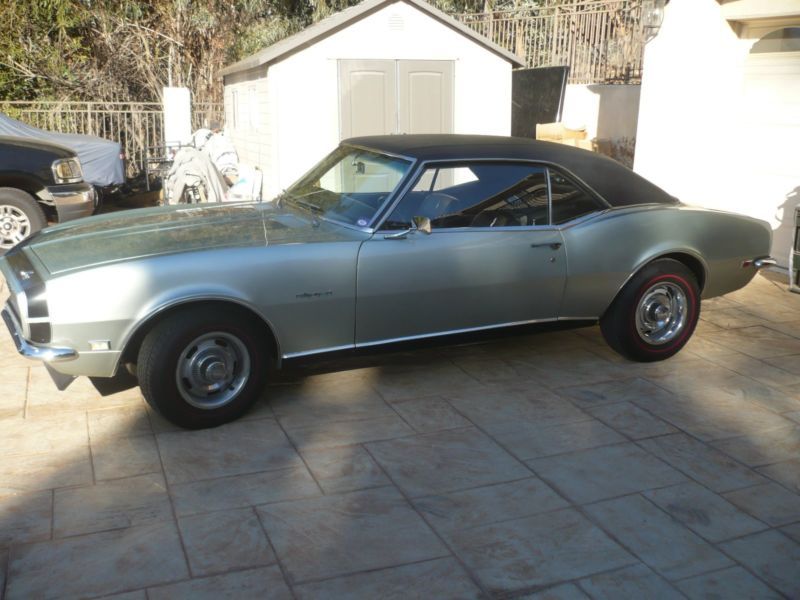 THIS IS A 1968 CHEVY CAMARO RS WITH ALL NUMBERS MATCHING, FRAME OFF RESTAURATION DOWN TO THE NUTS AND BOLTS TO
CONCOURSE CONDITION. THIS WAS A BARN FIND IT WAS STORED IN A HANGAR AT THE AIRPORT FOR OVER 30 YEARS, THE 19,000
MILES ON THE CAR ARE BELIEVABLE. THIS CAR CAME ORIGINALLY WITH RARE OPTIONS SUCH AS DELUXE HOUNDSTOOTH
INTERIOR(CODE 749), AND REAR FOLD DOWN SEAT(CODE 467). ENGINE=REBUILT 327 WITH MATCHING NUMBERS, POWER
STEERING,POWER DISC BRAKES, TRANSMISSION=ORIGINAL POWER GLIDE, REAR-END= 3.31 OPEN. EXTERIOR=NEW SEAFROST GREEN
WITH BLACK VINAL TOP-PAINT CODE=P2. THIS BEAUTIFUL CAR WAS BUILT IN VAN-NUYS, NEVER LEFT LOS-ANGELES AND NOW LOOKS
AND DRIVES AS IF IT JUST ROLLED OUT OF THE SHOW ROOM IN NOVEMBER OF 1968. PROCESS OF RESTAURATION: STARTED WITH A
RUST-FREE CAR, ALL METAL IN THE CAR IS ORIGINAL, FRAME OFF RESTAURATION , POWDER COATED FRAME, INNER FENDER
RADIATOR SUPPORT ALL SUSPENSION PARTS AND REAR SUSPENSION,LEAF SPRINGS, REAR END HOUSING ALL BUMPER BRACKETS,
REBUILT ORIGAL ENGINE, TRANSMISSION.