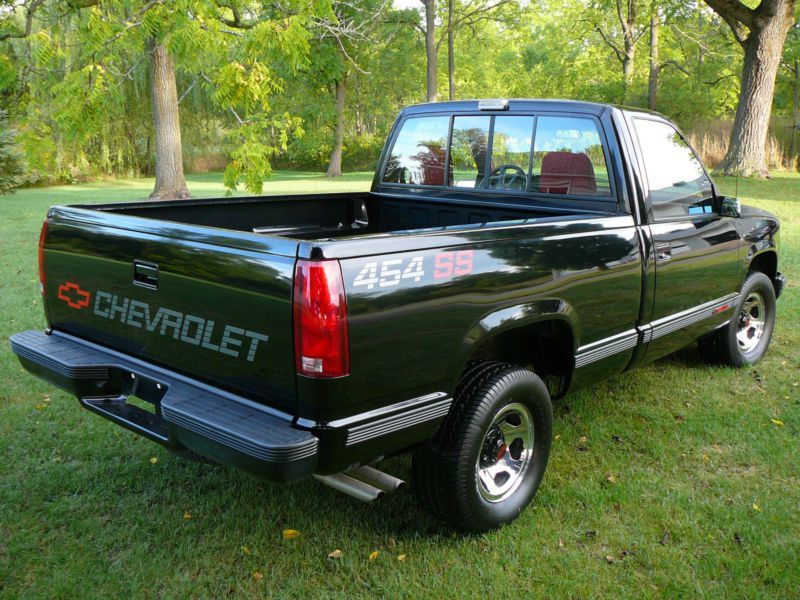 The 1990 Chevrolet 454 SS is a high performance full size pickup that mated the C1500 standard two wheel drive cab
with an absolutely killer 454ci 7.4 liter, eight cylinder engine(V-8), the 3 speed automatic transmission and a
3.73 rear axle ratio helped thrust the 454 beast under the hood, the engine(90 Model) produced a maximum of 230hp,
385 foot pounds of torque, All this power was pushed out to Goodyear tires on Special 454 SS rims. The interior
comes equipped with a special plush Garnet Red cloth interior and high-back reclining sport bucket seats with a
Center Console.
Other items include front air dam with lights, 454 SS graphic decals on rear bed left and right, black paint with
black grille, bumpers, and mirrors. Halogen Headlamps, Also standard for the 454 SS were 32 millimeter Bilstein
gas-filled shock absorbers, a 32 millimeter front stabilizer bar, 12.7 to 1 fast-ratio steering gear assembly and
heavy duty jounce bumpers.
A Little history
The 454 SS was and still is a pure thrill machine. Stock models are good for mid to high 15 second range in the
quarter mile times. Its midrange punch is even better. The 454 SS was manufactured and assembled at only one
General motors plant located in Fort Wayne, Indiana.
This particular truck was sold new in Rochester, New York to a local Chevy enthusiast. Purchased for its rarity
and performance, the truck saw limited use in nice weather. I acquired the truck in 1993 with only 1,220 miles on
it. The truck has spent the past 22 years in our collection. Just 200 miles has been added to it over that time.
The clear NY title still in the original owner's name has been signed off and is ready to be transferred into the
new owner's name.
This sought after truck is in near show room condition with only the light oxidation on the bare metal parts and
light scuffing on the bed floor keeping it from being perfect.
The body is free of any issues. Never damaged or repaired. The tires are original. The interior is flawless.
This limited production sport truck starts runs and drives like new.