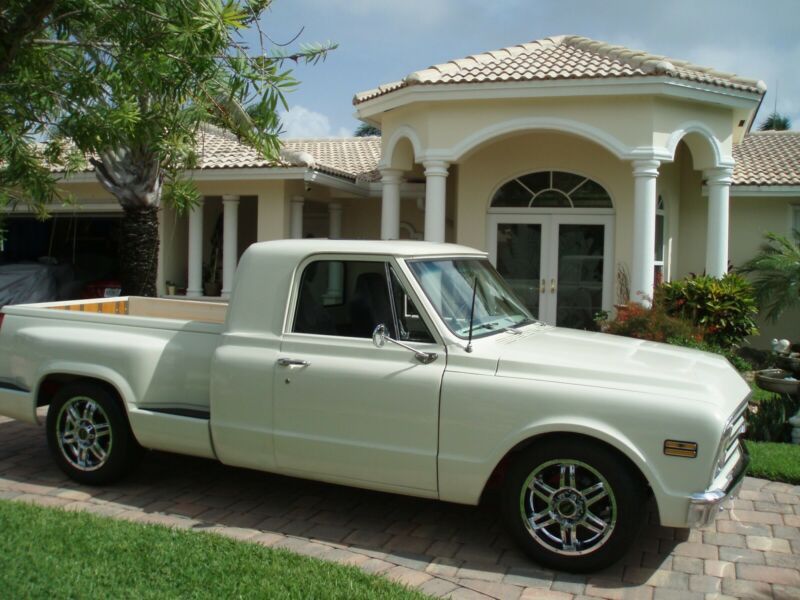 This truck was built using everything NEW! Even all new nuts and bolts. The paint is a beautiful
“Cool Vanilla White” that is flawless! Not one mark or ding that I could find.

The power plant is a 400 port & tuned fuel injected, w/ 700 R4 transmission, w/ mild cam and ceramic
coated shorty headman headers. The engine compartment is loaded with all chrome and stainless steel. It runs great
and is quick! It is built to cruise at any highway speed you prefer. Or just cruise around or enter it at your
Classic car & truck shows and pick up a few trophies. It has all new power steering, power disc brakes SSB and air
ride technology that is controlled from the cab. The A/C “Old Air Products R-134” is ice cold and the heat is
hot. There is a four-row aluminum radiator, w/ duel electric fans to keep it running cool on those hot summer
days. Additionally, it has a tilt steering wheel, CD/DVD w/amp stereo system that has a pop-up screen.

The interior is done with the best materials for the most comfort. There are adjustable, reclining
bucket seats and a fold down console with an extra storage compartment and cup holders. Lots of leg room due to the
extended cab. There are Cheyenne door panels and arm rests for that classy look! Throughout the truck all the
chrome is new including door handles and accessories, also the grill, bumpers, marker lights, vent window frames
and glass, windshield, back window etc. New 18 " American Racing Wheels and Nitto Tires were installed. All the
lights in this truck works the way they should, including interior, directional, and wipers, etc. The instrument
panel has a new Classic Instrument Cluster with digital speed input. The bed is a step side and the flooring as
well as the tailgate are both oak with stainless steel rails and bolts.