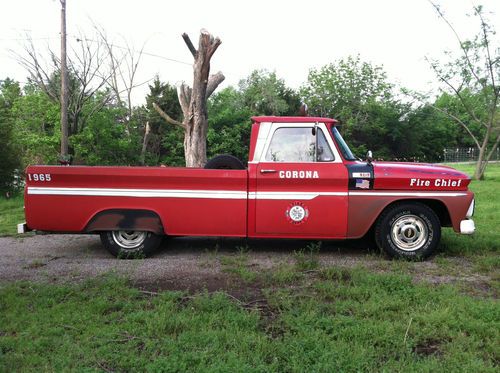 UP FOR SALE IS A 1965 FIRE CHIEF  CHEVY LONG BED C-10 PICK UP,HAS A 350 V8 WITH HEADERS AND STRAIGHT PIPES WITH CHROME TIPS,HAS FENDER SKIRTS,ALSO HAS A RADIO MIC ON DASH NOT HOOKED UP,ALSO HAS RED CAT EYE LIGHTS ALSO NOT HOOKED UP ITS JUST FOR SHOW ITS A RAT ROD LOWERED IN THE FRONT 3IN AND LOWERED ON THE REAR 3 1/2 IN, THE WOOD IN THE BED IS IN GREAT SHAPE,THE HEATER ALSO WORKS,THE TRUCK HAS MINOR DENTS AND DINGS,NO RUST VERY CLEAN FIRE TRUCK FOR ITS AGE, RUNS AND DRIVES BEAUTIFULLY ON THE FREEWAY NO SHAKES HAS ORIGINAL RADIO NOT HOOKED UP ALSO AND THE INTERIOR IS ALL THERE IT HAS A 4 ON THE FLOOR BUT ALSO COMES WITH THE 3 ON THE TREE TRANS AND AN EXTRA GRILL AND EXTRA 2 COWLS AND 1 DOOR PANEL AND ONE ARM REST AND IT ALSO HAS NEW EXHAUST SYSTEM,INTERIOR LIGHT AND DASH LIGHTS WORK ALL OUT SIDE LIGHTS WORK AND HORN AND WIPERS WORK AND IT HAS POWER STEERING AND CLEAR TURN SIGNAL LENS AND NEW TAIL LIGHT LENS,AND I ALSO GOT THE 2 MUFFLERS THAT GO WITH THE TRUCK IF THE BUYER WANTS TO PUT THEM BACK ON, ITS ONE BAD RAT ROD FIRE TRUCK, A MUST HAVE NOT MANY LIKE THIS AROUND ANYMORE.. THANK YOU FOR LOOKING. OH BEFORE I FORGET THE TAGS ARE UP TO DATE, I DO TAKE IT TO HOT ROD SHOWS EVERY WEEKEND AND IT ALSO COME WITH A 1965 CHEVY PLATE BLACK AND WHITE.               ( NO RESERVE.)