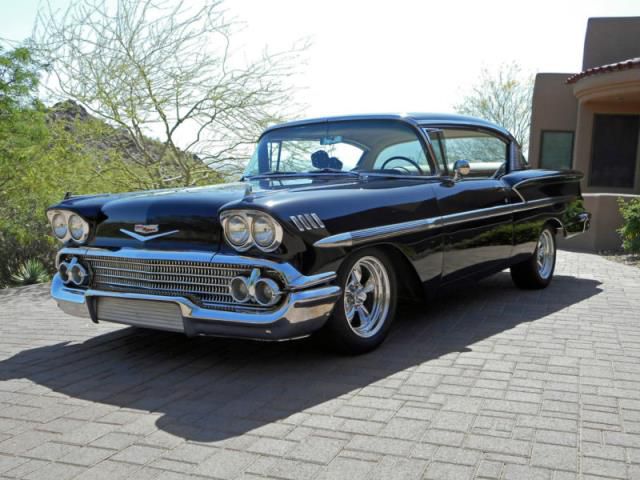 As our retirement years have arrived, periodically we will be offering a few cherished classics, privately owned within our west coast collection Never any rust nor body issues. The undercarriage is very clean and painted, as shown within the current photos taken the day of this listing. No spray bombs here! Just honest quality as you can view the original floor pans and frame in excellent condition. The incredible Chevrolet Bel Air hard top was the beneficiary of a complete nut and bolt, no expense spared rotisserie restoration in 2011. It is a very high quality restoration, the expense of which is substantially much more than the "Buy it Now" price, let alone the initial acquisition cost. Sporting a deep beautiful PPG two stage paint, this 1958 Chevrolet has been painted only once. I will include prior photos with the car, evident of a wonderful no issue Arizona body prior to restoration. A 350 CID V-8, with polished Tune Port Injection. The engine looks like jewelry, within the pristine detailed engine compartment! A new 700R4 automatic transmission was installed. Sanderson jet coated headers as well. Rebuilt differential is 3.55, great for comfortable driving. Four bar rear suspension. Serpentine belt system with chrome pulleys. Stainless steel dual exhaust with Magnaflow mufflers. All new Ron Francis wiring and circuit panel. Tubular "A" arms. Power disc brakes 11" front, drum rear. Air ride Technologies suspension with controls in the glove box. Magnificent chrome. A 32 gallon custom aluminum gas tank.