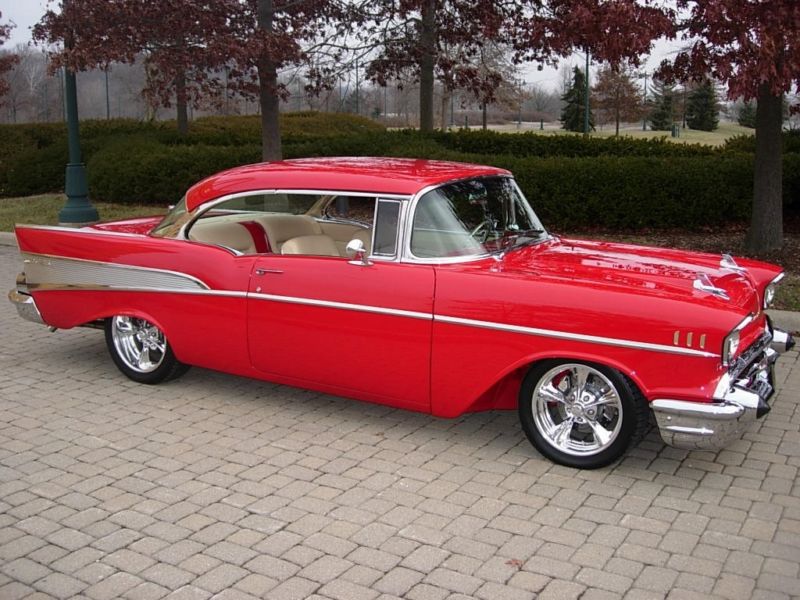 If you have any questions or would like to view the car in person please email me at: racquelrooakes@ttfans.com .

This outstanding National Award Winning Chevy Bel Air has undergone a meticulous professional $200,000 build!
Every inch of the fit and finish is perfect on this car from top to bottom with complete restoration and
customization photo documentation (see link below).
Engine is a completely polished 383 Chevy Stroker engine with Roller rockers and Roller cam, polished Aluminum
heads, stainless headers and a polished Holley Ram fuel injection. Cooling is provided by a Ron Davis Racing
polished Aluminum radiator with 2 computer controlled fans. 430HP and 390ft lbs Torque.
Exterior features a perfect Red finish with all new or refinished chrome, stainless and tinted windows all
around.
Foundation of the car is a built Jim Meyers custom frame, with a 9” Curry rear end with 3:89 Pro Track gears,
Panda Bar 4 link, Polished A-Arms, coil over suspension front and rear. Car rides on 18” Billett Specialty
wheels.
Transmission is a smooth shifting 700R4 with a custom Billet Specialties shifter.
Stopping is provided by polished, drilled and slotted Wilwood disc brakes on all four corners.
Interior is a work of art with all Cream and Tan Leather with matching carpet and trunk, custom dash and
gauges, A/C, custom center console front to back, bucket seats in front, push button start, power windows, and a
tilt polished column.
More custom options include: power steering, stainless gas tank, stainless exhaust front to back, and more.
Recent Service includes replacing all seals, gaskets, distributor, and ECU...as well as adjusting breaks and
tuning the the motor...plus a brand new Pioneer 8000nex head unit...expenses of over $15,000 that have already been
completed for you to make the car safer and more fun to drive.
PLUS...this car has am amazing $10,000+ sound system featuring a Pioneer 8000nex, Morel Speakers, and Boston