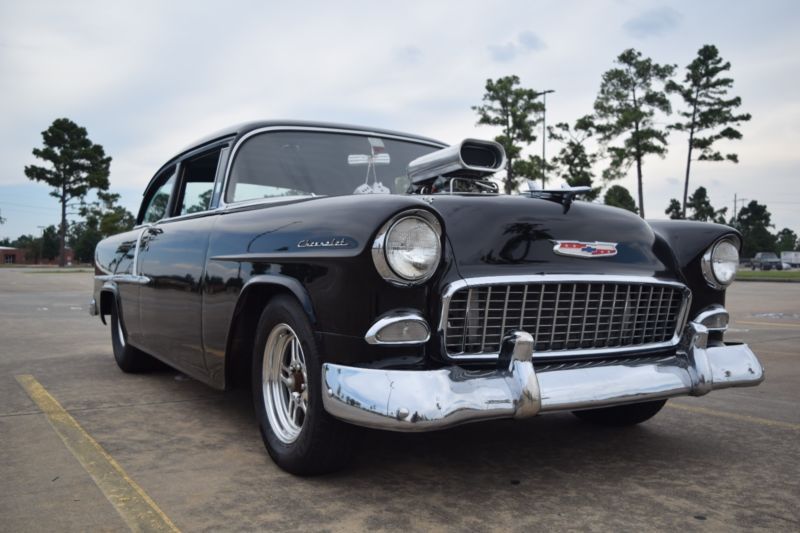 This is One Bad 55. 800 HP Blown 454 punched 30 to 461 cubic inches. Runs cool all day in Texas heat and Houston
traffic. Car has all the power you'll ever need. Idles great and is an excellent cruiser. You can cruise the
town or kick Corvette guys butt. She's a real eye turner and center of attention wherever she goes. Not a show
car but an excellent driver and mechanically sound. You could never touch her and enjoy her forever or she makes
an excellent starting point for a Barrett Jackson show stopper. I've had the car for 9 years and might have put
2,500 miles on her. The prior owner had Dakota Engine builders build the engine and he put about 2,500 miles on
the engine. Car has been in my A/C garage for 9 years. Dad's a mechanic and he's kept her running like a top.
Hate to see her go but it's time for her to be back with somebody who can give her the attention she needs. My 3
young kids aren't into Hot Rodding yet. - 454 punched 30 to 461
- Dyers 871 blower
- Rectangular D-Port aluminum heads slightly ported
- Turbo 400 transmission
- Hurst shifter
- Dutchmen adjustable coil over suspension
- 3 link ladder bar rear suspension with coil overs
- 9" ford rear end with 4.11 gears
- Two 850 Holley's jetted for blower engine
- Isky level 4 blower cam
- 4340 Eagle Rods and Crank
- JE Pistons with static compression of 8.2
- MSD Ignition with rev limiter
- Wildwood brakes on front and drums on rear
- 18.5 Mickey Thompson Radials on rear