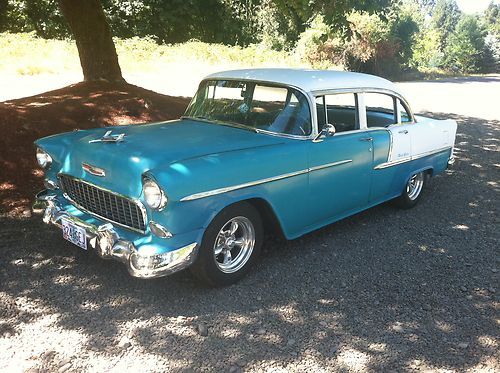 Condition: Used: A vehicle is considered used if it has been registered and issued a title. Used vehicles have had at least one previous owner. The condition of the exterior, interior and engine can vary depending on the vehicle's history. See the seller's listing for full details and description of any imperfections. ...
1955 Chevrolet Bel Air 4 dr. Automatic 235ci I6. with Flowmaster custom exhaust. Runs and drives perfect!!! All original!! Brakes are great. Tires are great with custom rims. Just tuned up and ready to go. Could be used as a daily driver. Does have rust on passenger side floorboards (See Photos). Paint is very dull and old will need a paint job. Has spots on front fenders were dents were pulled and touched up with same color paint. Windshield wipers need new wiper motor, Missing passenger door glass and driver side door glass is cracked but the rest of the glass is good. I just drove it with all the windows rolled down it never bothered me because I only drive it on warm sunny days. Missing front door panels. But overall it is a great running and driving classic car that you could drive and fix up. Parts are very easy to find for these tri-five Chevys. Beautiful Awesome Hotrod at an affordable price!!!!!!!!!!!!!!!