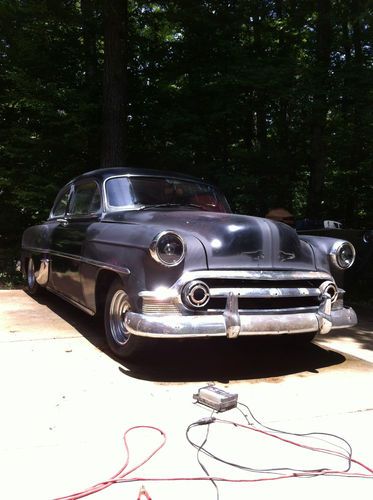 1953 Chevy 2 door 210 sedan. Refurbished 216, 3 speed transmission, 1954 Lee style taillights, '54 bezels, most of the body work is ruffed in. Needs a few guide coats and it'd be ready for Hot Rod Flatz paint. Car is no where near perfect, but would make a cool old school hot rod or rat rod. Runs drives and stops, but I've only made 1 10 mile trip in it, and some laps around the shop, so there may be bugs to work out. Rebuilt master cylinder, interior complete, headliner bad, seats have Mexican blankets on them. 14"/15" chrome smoothies, missing some chrome pieces here and there. Someone has sheet metal patched the floors. Under the hood has been cleaned up nicely when I had the motor out. New projection style headlights. Front tires only hold air for a few days before they go flat. Glass is fair (back glass is good).

Would make a nice father son project, or a cheap ride. Just needs a little TLC. I have lost all interest in it and could use the extra cash.

No title, bill of sale only

Email for any more pics or info. Car is for sale locally, so it may be taken off.

$500 deposit due within 2 days of auction end. Buyer must arrange shipping.