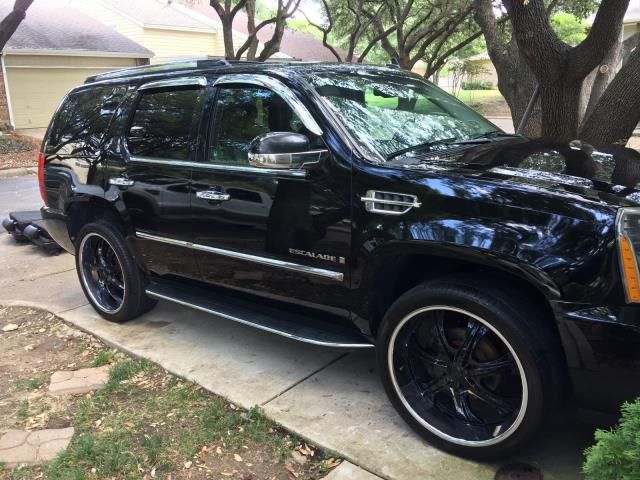 For more details eMail me : EloisTibbalsqzjv@yahoo.com

2008 escalade platinum black on black,has some rare options that you don'tnormally see it has cold weather package and rear power folding bench seatinstead of the usual captains chairs so you can fit an extra person. You canfold either one seat or the whole bench if wanted with the push of a button. Has3rd row seating hardly used we intended for my wife to drive it butcircumstances changed and we no longer need the bigger size. We recently had itfully serviced with new front and rear shocks(passive no longer problematicair), all new rotors and brakes,spark plugs and wires, oil change and new frontwheel hub bearings 24" black and chrome rims,tires have plenty of life about70%. Recently had it fully detailed carpets cleaned waxed etc. Being sold as isit's 9yrs old average wear has a couple small issues,needs alignment,needsnew rear back up camera,tps sensors aren't disk givesa read error but we never used it anyway,has some minor rust spots on the reartail gate,Rear tail gate has a dent under the wiper and the front fender has asmall dent and rub mark.

All-Wheel, All Right
There is no escaping the luxury all-wheel drive empire Audi has built for itself over the past 15 years. While nearly every high-end marque has at least one offering with power at all four corners, the hardware can't help but play second fiddle to Ingolstadt's Quattro kingdom. Leather-lined all-wheel drive is simply Audi the way minimum wage is an English degree. But General Motors seems hell-bent on raiding as many established fiefdoms as possible with the 2013 Cadillac ATS. Engineers and designers made no secret of the fact that the baby Cadillac was penned specifically to take on the BMW 3 Series, but Audi should be no less concerned about the newest luxury prince from Detroit.
GM has been stuffing all-wheel drive systems under their vehicles for years, but the effort hasn't come without nasty side effects. Unfortunate understeer, extra ride height, smallish wheels and porky curb weight meant opting for all-wheel drive was like signing your driving pleasure's death warrant. Would you like polished brass or brushed nickel hardware for your right foot's coffin, sir?