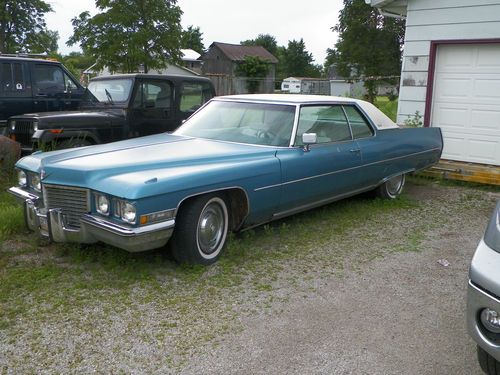 Condition: UsedA vehicle is considered used if it has been registered and issued a title. Used vehicles have had at least one previous owner. The condition of the exterior, interior and engine can vary depending on the vehicle's history. See the seller's listing for full details and description of any imperfections.Seller Notes:"all original there is surface rust and some rust at the bottom of the driver side fender. It also needs shocks and springs. It has been in my family since brand new."

It is all original except for the exhaust,it has true dual exhaust,it needs shocks and springs,there is some rust on the surface and on the bottom of the driver side front fender

it has power windows,power locks,power seats,cruise control,telescopic tilt steering wheel
it has been in my family since it was bought brand new at Premier Cadillac in downtown Toledo Ohio
Payment: Deposit of US $500.00 within 48 hours of auction close. Full payment required within 3 days of auction close
Shipping: Buyer is responsible for vehicle pick-up or shipping