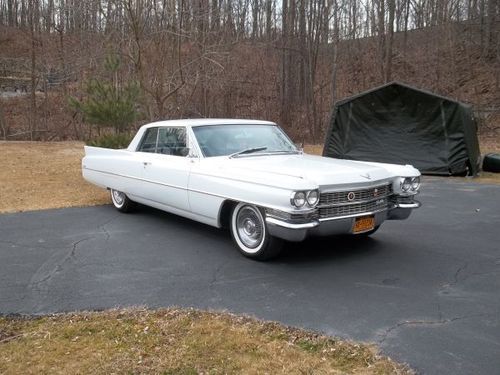 For sale is my 1963 Cadillac Sedan de Ville show car.  I purchased it from the original owner 2 years ago and it has 113,636 miles on it.  It has been garage kept since I have had it and has been entered in local car shows and competitions. She won 8 trophies last year. The car went through mechanical and tune-ip work when I got her.  She had her carburator rebuilt, her brake wheel and master cylinders replaced, new fuel pump, alternator, new shock absorbers, battery and fuel tank installed.  Finally, she was repainted her original GM white last year by MAACO in Goshen, N.Y. When repainted, fender rust and rocker panels were replaced by MAACO by welding in new metal (no BONDO).   She is truly a beautiful show car and I am moving to Florida in April and the garages are too small house her.  She is in the restoration process and there are several items that still are still required:  there is a minor electrical short that requires the car to be kept on a charger when stored; the transmission front seal and cooling hoses have to be replaced, as they are leaking; the driver side rear power window motor is not working; and there are 2 minor dings on the rear bumper.  Buyer must pay a $500.00 deposit within 72 hours of auction end and is responsible for inspection, pickup and shipping.  There is no existing warranty on the vehicle. She has historic plates and insurance.  She is a proud old girl and an excellent show car.  Please ask any questions before bidding.

On Feb-25-13 at 12:23:32 PST, seller added the following information:The Title is wrong It should be a COUPE deVILLE