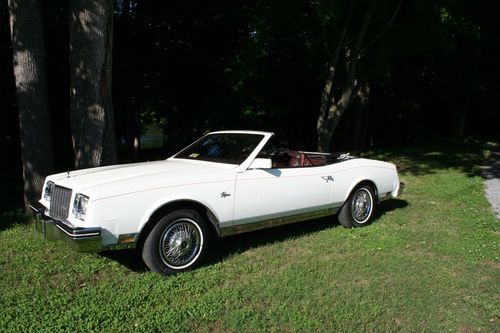 1983 Buick Riviera Convertible, No rust original Texas car, my father found this car in Hemmings Motor News in 1995 and went

to Dallas to pick it up. It was carport kept there and has been garage kept since. He replaced the rubber bumper extensions with
fiberglass ones and had it painted. New top was installed at some point,has no stains or tears and still looks new.Top works great! Back window is nice also.
This was his baby and never driven in rain.Car has been driven very little the last couple years. I drove it about 50 miles to my home, it ran fine.Washed off the dust.
Tires are old don`t know if they will go another 50 miles or 5000. All chrome and trim is in excellent condition,to my knowledge car has never been hit.
Paint is still nice but  it does have some small nicks and 2 small dents in drivers door. Again,there is no rust in this car and it shows very well. New
tires and you have a very nice driving car.