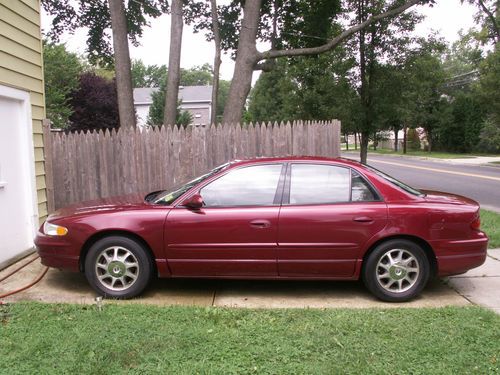 Condition: UsedA vehicle is considered used if it has been registered and issued a title. Used vehicles have had at least one previous owner. The condition of the exterior, interior and engine can vary depending on the vehicle's history. See the seller's listing for full details and description of any imperfections.Seller Notes:"Immediate needs front/rear brake pads and rotors & currently displays a brake light. Has minor dents in hood and piece of trim on roof is coming unglued. AC blows warm. 1 Fog light does not work."
This car is in good overall condition and has 101,130 miles. It is cardinal red exterior and beige interior easily values at or above $4,100 Fair KBB pricing with the following options: power heated seats & side mirrors, power sunroof, CD player, side curtain airbags, factory upgraded sound system & alloy wheels.
The car is in immediate need of brake pads and rotors & currently displays a brake light. This regal comes with new Falken 225/60/16 tires put on this year as well as always having the oil & filter changed every 3,000 miles. The AC system needs servicing since it only blows warm air. 3 sets of keys and fobs come with the car. 1 quart of oil leaks every 3,000 miles. The hood has a few small dings in it.
I am the original owner with 3 other cars. I am looking at buying a new house & do not have time to fix since I travel frequently for work.
Any questions, please text/call Anthony at 609 221 0117.
Mechanic inspection welcome at your cost. Inspection up this month but should easily pass with brakes fixed.
Car is at 301 Haines Avenue, Barrington 08007