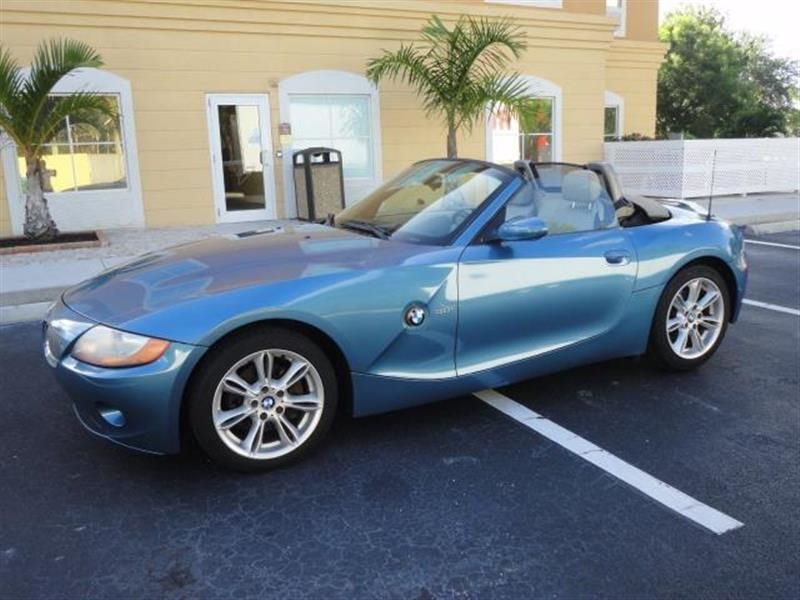 For more details eMail me : BillBezakqkh3708b@yahoo.com I RELIST THIS CAR BECAUSE THE WINNER OF THE AUCTION DIDN'T COMPLETE THETRANSACTION. 2004 BMW Z4 3.0 ROADSTER CONVERTIBLE, CAR ENGINE3.0L, RARE 6 SPEED MANUAL TRANSMISSION, VERY GOOD SHAPE FOR THE AGE, NOACCIDENT, CLEAR TITLE. 82500 MILES VERY WELL MAINTAINED, 20 SERVICE HISTORYRECORDS BY BMW OFFICIAL DEALER.BODY LIGHT METALLIC BLUE WITH NO DENTS, DINGS ORSIGNIFICANT SCRATCHES.INTERIOR IN BEIGE LEATHER IN GOOD SHAPE AS WELL.TAN CANVASOF SOFT TOP IN GOOD WORKS FINE. THE MOTOR LOCK OF THE SOFTTOP WORKS FINE. OPENING AND CLOSING THE TOP REQUIRES MANUAL HELP. TIRES ALMOSTNEWOWNER'S MANUAL Navigli USA Inc is a family owned used car dealershiplocated in Fort Myers FL. Our business is operating in Charlotte county and Leecounty since 2009. We strive to separate ourselves from the excellent customer service, high quality European and Japanese luxurycars with clear titles but most of all at the best prices of the entire SWFL. Weare easily reachable from the exit 131 of I-75. Our can be always consulted with our updated inventory andCarfax report available for each vehicle for sale. Since we price our vehicleslike a wholesale dealer you can save thousands dollars.Our prices are lower thataverage retail market value soplease make only reasonable offer. We are able tohelp you to arrange transport everywhere with a reliable shipping company. Ifyou prefer to pick up your car you can come by flight to Fort Myers Airport andback home driving your car.