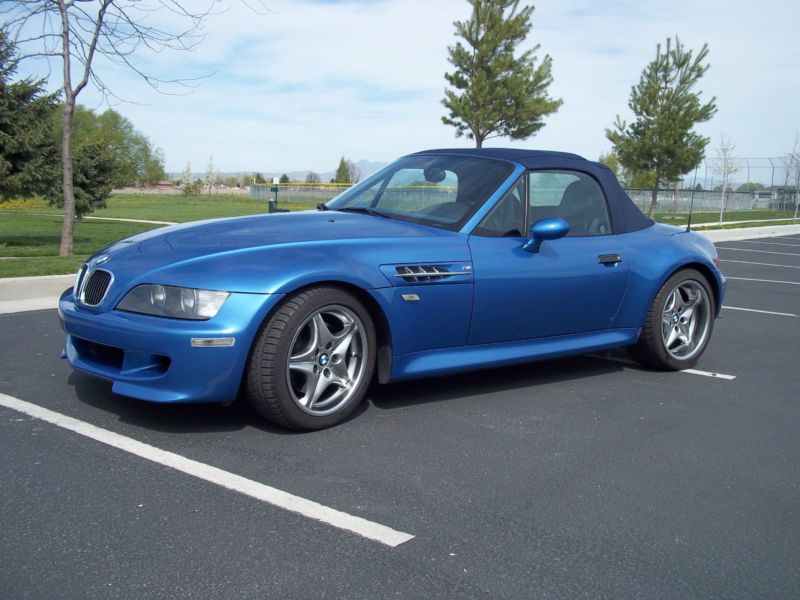 Please email me with any questions or requests for additional pics or something specific at: rhettvoong@netzero.net .

2001 BMW S54 M ROADSTER
***This is a RARE BMW convertible***
One of the most sought after BMW sports cars ever built!!
Production Stats:
Total number with S54 engine in 2001: 921
Total number in estoril blue metallic over estoril blue & black nappa with a blue soft top in 2001: 68
I am proud to offer this 2001 M Roadster with only 39475 miles.......although I regret having to sell.
This is the M-Series version of the Z3 which includes the S54 six cylinder engine putting out 315 HP, capable of 0
- 60 in 4.5 seconds and coupled with the 5-speed manual transmission.
Recognized as one of the BEST engines that BMW put into production!!
This vehicle is in excellent condition and has NEVER been in an accident. Garage kept and under cover.
All VIN stickers intact. There are NO stories with this M Roadster! AN HONEST CAR!
I am the 3rd adult owner....carfax certified!
My Roadster has never seen winter driving conditions! A garage Queen! ADULT OWNED!
All service is up to date..... Nothing needed.
I purchased it over 2 years ago ( with just over 36K miles ) and I immediately installed brand new Michelin Pilot
Super Sport tires. It came with the euro clear corner lights, the aftermarket shift knob and the Strong strut bar.
I installed the Whalen seat bushings as an upgrade. ( to correct the seat movement ). It comes with the boot, car
cover, wind deflector, all the original books and manuals, THE ORIGINAL WINDOW STICKER, the 4 original keys, the
original factory tool kit, the factory air compressor, quite a bit of the service receipts.
Only the slightest signs of wear will be found, there are a few tiny touched up stone pecks up front from normal
driving.
Options include: Harman/Kardon premium sound system, CD player, air conditioning, cruise control, heated seats,
power locks, power windows, power seats, power top, leather seats, anti-lock brakes, driver airbag, passenger
airbag and side airbags.
This rare, limited production M Roadster